LaLiga leaders Barcelona beat Real Mallorca 4-0 in their first game back after the coronavirus-enforced hiatus.

Arturo Vidal, Martin Braithwaite, Jordi Alba and Lionel Messi were all on target as Barcelona beat Real Mallorca 4-0 to make a winning return in LaLiga.

It had been three months since the leaders last played because of the coronavirus-enforced break, but they needed less than two minutes to go ahead through Vidal’s header.

Braithwaite then fired in a second eight minutes before the break in a game that also saw the return of Luis Suarez from injury.

Alba struck11 minutes from time before Messi wrapped up victory in injury time as Barca went five points clear of Real Madrid ahead of Los Blancos’ return to action on Sunday.

There was no sign of any rust in Quique Setien’s ranks as Barca went ahead after just 65 seconds.

Frenkie de Jong robbed Real Madrid loanee Takefusa Kubo in midfield and the ball was delivered into the box by Alba, with Vidal running onto the cross and directing his header into the bottom-left corner of the net.

Barca threatened to put the game to bed early on as Braithwaite and Messi both came close before Mallorca finally woke up.

Kubo looked intent on making amends as he forced Marc-Andre ter Stegen into a good save from the edge of the box before being denied again with a low free-kick.

Yet the leaders doubled their lead before the interval, Braithwaite clinically dispatching his first goal for the club after a scrappy build-up that included headed flick-ons from De Jong and Messi.

Mallorca nearly found a way back into the match shortly after the restart, but Ante Budimir’s first-time effort was always bending away from Ter Stegen as it flew wide.

Setien brought on Suarez – out since January because of a knee injury – and that seemed to galvanise Messi, who set up Braithwaite and Ronald Araujo for efforts that were stopped by Manolo Reina and the post respectively.

Messi would not be denied a second assist, though, as he cleverly flicked the ball over the top for Alba, who just managed to stay onside and finish at the near post.

There was time enough for Messi to get on the scoresheet as he kept his balance in the box before working space and firing right-footed high into the net.

What does it mean? No away day blues for Setien’s side

Barca’s away form has been a problem this term and they arrived at Son Moix having won just one of their previous five LaLiga games on their travels, conceding 10 times across those games.

However, with centre-back Araujo making his first start, the Blaugrana recorded their first away clean sheet of 2020 and extend their lead at the top.

Coming into this game, Ter Stegen had more LaLiga assists this season than Alba but the left-back pulled level with his early cross for Vidal’s goal.

The 31-year-old was involved in the second goal too, while he regained possession a team-high six times and had three clearances to boot.

The return of Suarez – and the continued transfer talk surrounding Inter’s Lautaro Martinez over the break – should have jolted Antoine Griezmann into delivering a better performance.

However, in the 57 minutes the Frenchman was on the pitch, he failed to have a single shot and Braithwaite’s goal means Griezmann is in danger of falling further down the pecking order.

Congratulations, Martin, on the occasion of your FIRST BARÇA GOAL! pic.twitter.com/AOMdhOTy9l

Barcelona host Leganes on Tuesday before travelling to Sevilla three days later as the fixtures come thick and fast in LaLiga. Mallorca, who have a crucial clash with Leganes next Friday, travel to Villarreal next.

Sat Jun 13 , 2020
The right-back is coming to the end of his two-year loan spell in the Bundesliga, but his temporary side are hoping to keep him for another year Borussia Dortmund are prepared to be patient as they look to bring Achraf Hakimi back to the club once his loan from Real […] 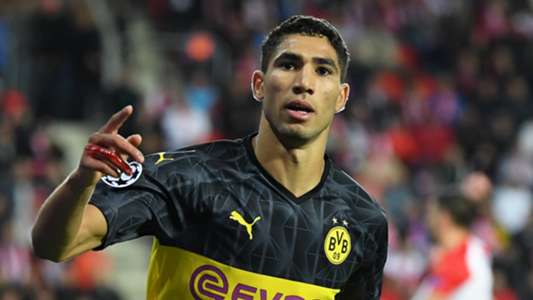