The pair butted heads – literally – just before half-time at the San Siro, resulting in both being shown a yellow card

Romelu Lukaku and Zlatan Ibrahimovic were involved in a heated clash on the pitch at the end of the first half in Tuesday’s clash between AC Milan and Inter.

AC Milan had taken the lead in the Coppa Italia quarter-final through Ibrahimovic, who fired home in the 31st minute to open the scoring at San Siro.

Tempers flared up just before the break after Lukaku took exception to a foul by Milan defender Alessio Romagnoli. Ibrahimovic stepped in and squared up to the furious Belgian, with the pair going head to head while exchanging heated words.

Lukaku could clearly be heard by the on-pitch microphone saying to the Swede: “Well let’s go inside you b*tch!”, in an invitation to engage in a further confrontation in the tunnel.

Referee Paolo Valeri attempted to regain some semblance of control by issuing both players a yellow card, with Lukaku now set to miss Inter’s next match in the competition.

Nicolo Barella also got involved by trying to hold Lukaku back while Fikayo Tomori – making his Milan debut after just joining on loan from Chelsea – aimed to hold back Ibrahimovic.

As the first half drew to a close, both players continued to be restrained as the teams went down the tunnel for half-time.

Just after the second half began, Ibrahimovic received a second yellow card for a challenge on Inter defender Aleksandar Kolarov and was sent off.

Lukaku and Ibrahimovic were team-mates at one point, playing together at Manchester United during the 2017-18 campaign.

Last year, Lukaku spoke of his admiration for the Swede , saying he was impressed by his ability to remain in such good form at an age when most players have already retired.

“Ibra is a champion, I respect him,” Lukaku told  Tiki Taka.  “In Manchester I could train every day with him, that was the most beautiful thing for me. It will be nice to play against him. He is a great champion and professional.

“For me it’s not normal that he can do those things at the age of 38. He works a lot; he always gave me advice when we played together in Manchester.”

Tue Jan 26 , 2021
Uganda 2-5 Morocco: Cranes eliminated, defending champions advance The Atlas Lions and Rwanda advance to the last eight, while the East Africans and Togo fall at the first hurdle at the Chan Defending African Nations Championship champions Morocco defeated Uganda 5-2 at the Reunification Stadium in Douala on Tuesday night […] 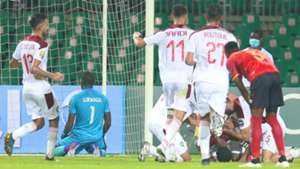