Mario Lemina has assured that Fulham will “fight until the end” to avoid relegation after the Cottagers snatched a 1-0 victory at Liverpool.

For Lemina, that effort was his first for Fulham as well as his third strike ever since making his debut in the English top flight.

The result leaves Fulham still in the relegation zone but tied on points with 17th-placed Brighton and Hove Albion, who lead them with a superior goal difference.

Be that as it may, the former Juventus and Southampton man says his team will continue fighting against the drop all through to the end of the 2020-21 campaign.

“We are going to fight until the end because we know where we are and we want to get out of the bottom three,” Lemina told the club website during a post-match interview.

“From the beginning we have been together, and we will stay together until the end.”

The 27-year-old expressed his delight with the away triumph against the reigning English champions, claiming his team took advantage of the out-of-form Reds.

“Honestly, we are so happy,” he continued. “We were like we must concentrate because it’s gonna be a tough game.

“We did well in the first half and we scored a goal after which we didn’t concede a goal. We could have it two, but I am very happy for the team for getting the three points.

“In my last game I missed a big chance and I was like I must score in this one [against Liverpool]  and I was really focused on my shooting and when the ball went in, its good for the team.

“Of course, I know that Liverpool are not in their best form, we took our chance and we won. It was like the first leg at Cottage.

“Honestly, we knew what we had to do, we knew they were going to put pressure on us, and we defended so well.”

Next up for Parker’s men is a tough test against the league leaders, Manchester City, at home.

Sun Mar 7 , 2021
The Zambian forward found the target for the second time against the hosts as her effort earned a point for her team Rachel Nachula was on target as Zaragoza were held to a 2-2 draw against Osasuna in a Spanish Reto Iberdrola tie on Sunday. Zambia’s Nachula was handed her […] 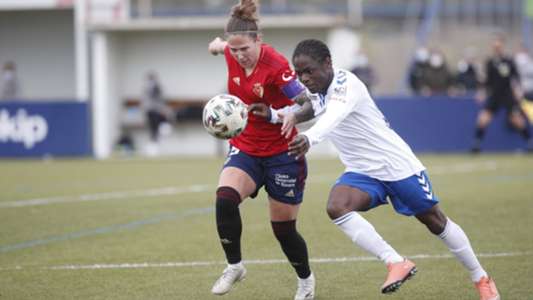