The Franco-Senegalese player’s contract at the Stade Oceane is set to expire on June 30 and was announced to have signed a deal with the Hornets back in April.

However his agent, Pierre-Henri Bovis made a statement via L’Equipe that the deal was not complete due to some “irregularities”.

“We are wondering about possible irregularities around the signing of the contract,” Bovis said.

“We do not deny the existence of an agreement concluded with Watford through the former agent of Pape Gueye, but we point the finger at what could appear to be anomalies.”

Now two months after the announcement and two weeks away from leaving Le Harve, Gueye released a statement via L’Equipe he won’t be moving to Vicarage Road.

“First of all, I want to thank Le Havre. After eight years at the club, it is time to turn the page,” he said.

“In the evening of the 30th June, I will quit the club that formed me. I want to thank all members of Le Havre for their companionship and their faith in me. Thanks as well to the loyal supporters, ever-present, who have carried this team.

“For me, the future is still uncertain. My mistake in this story is having had faith in a person who advised me poorly. I want to warn my colleagues of the abuse that they could be subjected to in terms of contract signings.

“I am not the first that this has happened to and I sadly won’t be the last. I wanted to speak out against the circumstances surrounding the signature of a contract with Watford and what I consider to be irregularities with their representatives.

“After numerous discussions, I conclude that there has not been any considerable administrative action taken to resolve my case. As a result, and in consideration of the fact that the contract has not yet taken hold, I announce the end of all contractual links to Watford.”

The irregularities stem from reports that claim Gueye had a pre-contract with two clubs in Spain and Italy before January 1, 2020, all initiated by his former agent Bakary Sanogo. Football laws state a player can only sign a pre-contract with another club six months prior to the expiration of his existing contract.

Despite calling off his Watford move, the Hertfordshire club according to Watford Observer are still planning to go ahead with filing the necessary paperwork to register Gueye as their player from July 1.

Mourinho warned severed relationship with Tottenham star could cost him

Mon Jun 15 , 2020
Date published: Monday 15th June 2020 7:39 Tottenham legend Glenn Hoddle says Jose Mourinho must make peace with the club’s record-signing Tanguy Ndombele or face the consequences. Ndombele, a £53.8million summer arrival, has had a largely frustrating first season under both Mauricio Pochettino and Mourinho. The Frenchman has only completed […] 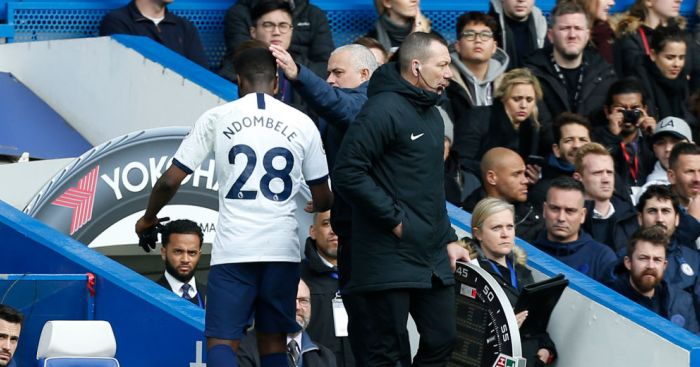