An Anfield cult hero concedes that fitness setbacks are doing the Reds few favours, but he believes domestic and continental crowns can be claimed

Liverpool’s squad is “definitely strong enough” to compete for Premier League and Champions League honours in 2021, says Dirk Kuyt, with the Reds cult hero saying a notable double can be secured in spite of problematic injury issues.

Jurgen Klopp has seen his squad at Anfield decimated by fitness setbacks this season.

Inability to name a settled side has prevented Liverpool from maintaining the high standards that have been set over recent years.

Uncharacteristic wobbles have been endured as a result, with the defending champions slipping off the title pace and out of domestic cup competition.

They are, however, still in the mix to defend their top-flight crown and are safely through to the last-16 in Europe.

Kuyt concedes that the Reds have found the going tough at times, with a welcome return to form enjoyed last time out in a 3-1 win over Spurs, but he feels major honours can be landed in a productive end to a testing campaign.

The former Liverpool forward has told Sky Sports: “For me the squad is definitely strong enough to win both competitions. But because of the injuries, it is challenging.

“We have spoken about Diogo Jota, I thought he was a very good signing for Liverpool and was scoring important goals before his injury. Thiago is coming into the team and unfortunately now we have a problem in the centre of the defence at the moment with many injuries.

“If Jurgen can cope with that then why can’t they challenge for both competitions?”

Liverpool’s next outing will see them go in search of more precious points in the Premier League, with a trip to in-form West Ham set to be taken in on Sunday.

They then have a further three top-flight outings to come, including meetings with fellow title hopefuls Leicester and Manchester City, before heading to Germany for the first leg of a Champions League last-16 encounter with RB Leipzig on February 16.

Klopp will hope to have greater options at his disposal by then, with there still a chance that another centre-half will be added to the Reds’ ranks before the next transfer deadline passes on Monday.

Sat Jan 30 , 2021
With the hosts inching closer to a home defeat, the Namibian came off the bench to hand the hosts a crucial equaliser Zenatha Coleman scored the only goal as Sevilla secured a 1-1 draw against Santa Teresa in Saturday’s Spanish Iberdrola top-flight fixture. The 27-year-old has continued to excel for […] 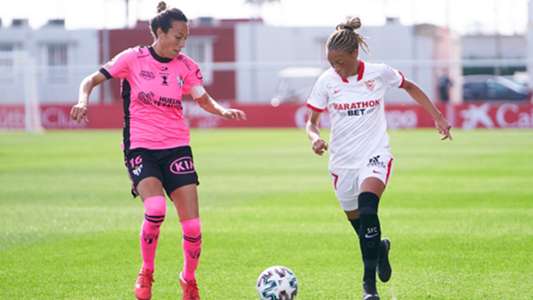