Ronald Koeman has said Barcelona need to dip into the transfer market if they are to improve, but is not confident of being given the funds to strengthen his squad.

Barcelona are lagging behind Atletico Madrid in La Liga following a slow start to the campaign. They have improved in recent weeks and are on a run of three wins on the spin in the league.

Those victories over Huesca, Athletic Bilbao and Granada cannot gloss over the fact that Koeman’s squad are lacking strength in depth which is likely to hit them hard in the race for La Liga and the Champions League.

Koeman has made his position clear, but feels financial issues will prevent him adding to his ranks.

“My position is known: we lack people, but the economic situation of the club is an influence,” Koeman said. “I think we all think the same. If no one arrives, I accept it and we continue the same, but if we want more we must sign.”

Koeman thought he had a deal tied up to bring in central defender Eric Garcia from Manchester City, with Goal revealing personal terms had been agreed, but presidential candidate Joan Laporta said the club’s board had elected not to spend money on a player who will be available on a free transfer in the summer.

“We cannot demand that the Management Board make decisions like this,” Laporta said of a possible move for Garcia. “We have concluded that if he is a player whose contract is ending, we must wait.

“If we moved now we would have to pay the transfer fee plus the player’s salary.”

Koeman’s focus has to be on working with what he has at his disposal for the remainder of the season, and he has said he will continue to speak his mind if he feels they are not performing.

“I am not going to lie. I say what I see,” the former Netherlands coach said. “If you are a Barca player, you have to be demanding.

“I criticise them with respect. I’m not going for anyone, I want to help them, but if we play against Cornella with all due respect and we are not able to win in 90 minutes, I have to say what I see.

“If not, bring in another coach.”

Sat Jan 23 , 2021
That is all for this evening, thanks for joining us as always. Goodbye! Real Madrid keep pace with rivals Atletico Madrid and move to within four points of Diego Simeone’s side thanks to tonight’s victory. Atletico have two games in hand, but Zidane cannot ask any more of his team […] 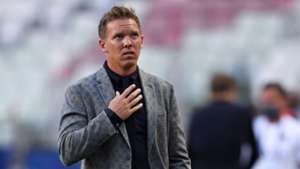