Express FC striker Mustata Kiragga has promised to build on his debut for the club against BUL FC in a Ugandan Premier League match on Saturday.

The 19-year-old, who joined the club from Alexandria FC in South Africa in August, was yet to feature for the team due to delayed paperwork but was handed his debut against BUL at the Kyabazinga Stadium, when he replaced Erick Kambale with ten minutes left on the clock.

By the time coach Wasswa Bbosa introduced Kiragga, the Red Devils were already running away with maximum points as they were leading 4-0 but for the player, the debut was worthwhile and he looks forward to performing even better when given another opportunity.

“It’s been a gruelling four months about, training hard as I waited for my paperwork to be sorted,” Kiragga told the club’s official website after the game.

“I want to thank the club CEO for doing a great job now that I can play, about the game [versus BUL], what a performance from the team, I am happy I marked my debut with such a performance, it’s just the start, a lot more is coming and as an individual, I am ready to fight for my spot and help the team win.”

On whether Express are ready to win silverware this campaign, Kiragga explained: “We still have a long way to go but one thing I can assure all our fans is that the team has one thing on their minds, winning silverware.”

Against BUL, the Red Devils scored through defender Murushid Juuko, Arthur Kiggundu, and Andrew Kayiwa as they picked up a win after drawing their previous fixture 1-1 against rivals and former champions Kampala Capital City Authority.

Kiragga has now been named in the team’s travelling squad for their next league match against promoted and winless side MYDA FC in Tororo on Tuesday.

The win away to BUL was the first time since 2018 that the Red Eagles won by four goals, it is also the club’s second away win of the season and fourth overall this campaign.

Express FC are now placed third on the table with 16 points level, with Police FC although the Cops have a superior goal difference.

Mon Feb 22 , 2021
The British tactician reveals why he thinks the Msimbazi giants can easily beat the African champions in a Group A fixture Dylan Kerr has explained why Simba SC stand a good chance to beat Al Ahly in their Group A match in the Caf Champions League on Tuesday. The Msimbazi giants will […] 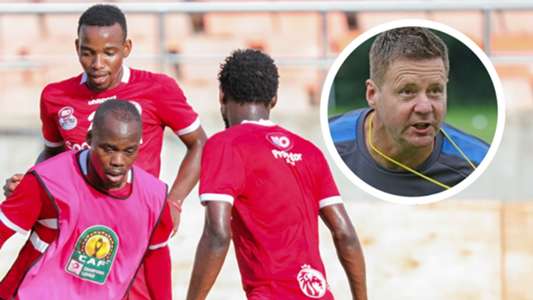