Eibar coach Iker Dorronsoro has lauded Thembi Kgatlana for her contribution, describing her as the benchmark for the Gunsmiths.

Kgatlana joined the Spanish outfit from Portuguese Liga BPI side SL Benfica on a one-year deal in July 2020, with an extension option.

So far this season, the 24-year-old has not taken her foot off the pedal as she has bagged eight goals in 16 Primera Iberdrola outings despite only lasting the duration in eight of those matches.

The South African’s 2018 breakthrough year saw her named the Player of the Tournament at the 2018 Africa Women’s Cup of Nations and was voted the African Women’s Player of the Year.

Following eye-catching performances so far, the Banyana star has continued to earn reviews in Spanish football and the coach has extolled her quality and on-the-field contributions to the team.

“She [Thembi Kgatlana] is a benchmark player for us,” Dorronsoro told the media during the press conference on Tuesday.

“There’s a lot of talk about her and I think that’s good for both her and the team. She is a benchmark player not only because of the goals she scores.

“She is a player who is not selfish, who squeezes, who works a lot without the ball.”

Despite a recent 3-1 defeat at home to Sevilla, Kgatlana registered her third consecutive goal in three matches for the Gunsmiths.

Ahead of Wednesday’s Primera Iberdrola showdown with Deportivo La Coruna, the Eibar manager believes the South African can make the difference for his team at Ciudad Deportiva Abegondo.

“She will also appear tomorrow [on Wednesday], and hope that she scores again and continue on this streak,” he concluded.

Dorronsoro is hoping to lead Eibar to finish on a high following a return to the Spanish top-flight for the first time since 2009 and will be counting on Kgatlana to achieve his ambitions.

Eibar are 10th on the Spanish Primera Iberdrola log with 21 points after 17 matches and will eye a return to winning ways at A Coruna.

Tue Feb 9 , 2021
35′ Ronaldo hasn’t been able to be involved much, he has hardly touched the ball as Juve are yet to test Handanovic in the Inter goal. It has been a cagey game so far. 33′ Decent effort! Brozovic finds time and space from around 25 yards out and fires an […] 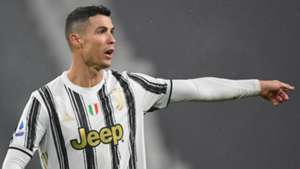