Timbe, who had featured in the previous 1-0 loss friendly to Premier League side Chelsea, assisted in the making of the third goal which was scored by Frenchman Michael Olise.

The other two goals for Mark Bowen’s side were scored by Lucas Joao and Omar Richards.

A swift move by both Yakou Meite and John Swift would have led to a goal for the Royals but Joao saw his final shot go wide off the left upright.

Olise would have opened the scoring moments later with a left-footed effort at the edge of the box but the ball flew over the top corner thus Reading saw their second most open chance go to waste.

Reading got the opener in the 30th minute when Swift won a free-kick, fired over the wall and found the underside of the cross-bar from 20-yards away. The ball dropped at a vantage position for Joao to plant it into the bottom corner with his left foot after good control.

Yakou Meite would have added a second for the home side but his effort was blocked after he had received a swift ball from Joao.

Omar Richards ensured the Royals went into the half-time break leading 2-0. The Englishman met a cross from the left side at the near post and fired home using his left foot to stretch their lead.

Portsmouth got their lone goal in the first stage of the second half when a misunderstanding between Rafael Cabral and Liam Moore cropped up. Oli Hawkins scored despite Rafael making a last-minute attempt to stop him from finding the back of an almost empty net.

Timbe would have earned his first assist for Reading after he made his trademark direct run from the left flank, cut back for Garath McCleary but Pompey stopped an otherwise superb build-up.

Timbe was not to be denied an assist later on when he rushed to collect a scooped ball, pulled it for Olise who fired into the right post for Reading’s third goal.

The positive performance came at the right time for Timbe who is fighting to ensure he cements his place in Bowen’s first team when the Championship resumes soon.

They will host Stoke City on June 20.

Sun Jun 14 , 2020
The Athletic subs watching on from the stands. LARREINA/UGSMARCA LaLiga Santander’s first Sunday afternoon game without fans in the stands came and went at San Mames and, in truth, it wasn’t all that bad. We see lower league games played with fewer people watching on than are in a Madrid […] 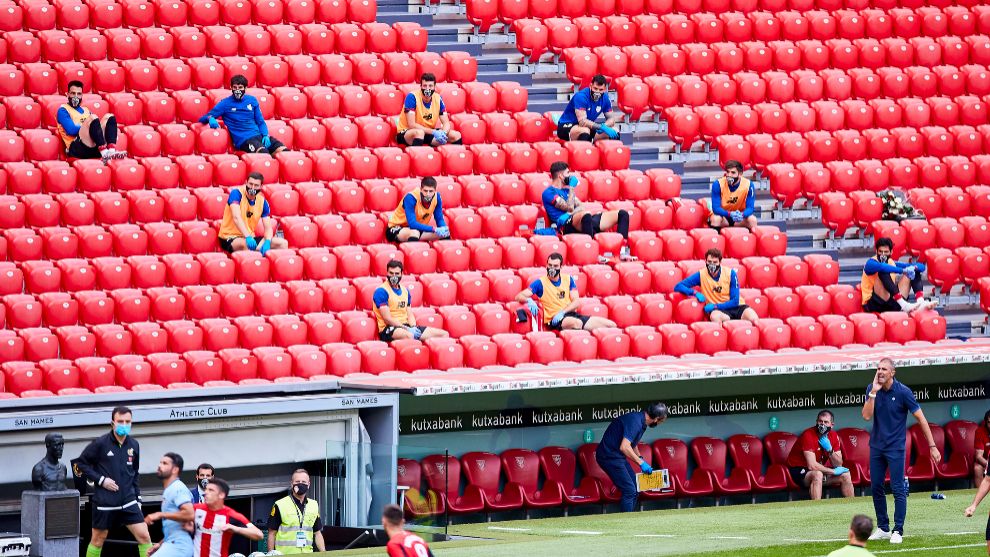