Kenya’s Jonah Ayunga scored a brace in Bristol Rovers’ 3-1 win over Portsmouth on Tuesday in a League One encounter.

Ayunga played a critical role as the Gas picked a win after going down 2-0 to Oxford United in a previous match.

The first clear chance for the hosts came when Luke Leahy, who was appointed as the stand-in captain. He looped a ball over the Portsmouth backline for Brandon Hanlan, but goalkeeper Craig MacGillivray won the one-on-one contest as he collected the ball with Rovers’ chance all but lost.

Luke McCormick for Rovers was, however, denied by MacGillivray after he was put through on goal by Sam Nicholson at the quarter-hour mark.

The Portsmouth custodian was alert moments later once more when he stopped Hanlan from scoring after he received a cross from Leahy in an open space along the left-wing.

The visitors took the lead in the 25th minute when a powerful cross landed on John Marquis’ path and the star fired home from close range to stun the home side. Rovers, however, equalised almost 10 minutes after conceding the opener.

Ayunga worked his way past the marker inside the penalty box before he fiercely fired home past MacGillivray who had been impressive before. The 34th-minute league goal was the first for the starlet.

He returned with his second of the day just a minute to the half-time break. Leahy delivered a clinical cross towards his path and the forward just brought the ball down with his chest, created enough shooting space before netting his brace with a low drive that found the corner.

Bristol would have scored the second goal when they created the first clear chance of the second half when George Byers – from the edge of the box – almost fired a low cross past Joe Day’s right-hand post.

Leahy won a penalty for Rovers in the 70th minute and he rose to convert it successfully. The captain for that day dispossessed a Portsmouth defender and moved swiftly towards goal but he was clipped from the back forcing the referee to award the spot-kick. The penalty found a way into the bottom left corner as he scored his sixth goal of the season.

As Ayunga celebrated his double, his coach Tommy Widdrington stated the win came because of a clear plan.

“We had a clear plan to make this place a difficult place for teams to come to,” the manager said as was quoted by Evening Express.

“Portsmouth are a very good side, if you finish above them you are likely to go up.

“We have proven we can compete with the best in the division. I have no doubt that we have enough in this building.

“If we can win more battles than we lose, we will win games. It is 11 vs 11 on the pitch, no matter who those players are.

“I’m gutted that we have not had fans here after this performance. The fans would have gone home delighted with that win, lose or draw.”

The next game for Atyunga and teammates will be an away trip to Gillingham.

Wed Feb 17 , 2021
The striker has risen to near the top of the Liga scoring charts in his second season with the Andalusian side, attracting attention from London Sevilla midfielder Fernando has saluted his team-mate Youssef En-Nesyri, who has attracted interest from across Europe with his scoring exploits this season. West Ham have […] 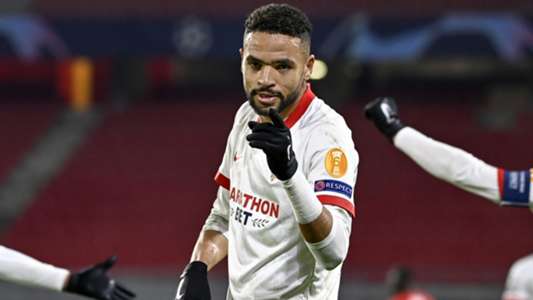