Kampala Capital City Authority FC fought back to snatch a point against Express FC following a 1-1 draw in a Ugandan Premier League game played on Wednesday at the Muteesa II Stadium, Wankulukuku.

Charles Lwanga scored late to ensure Kasasiro Boys went home with a point after going down in the first half to a goal scored by Erick Kambale.

The Red Eagles were left to rue the chances – across both halves – that went unconverted.

Godfrey Lwesibwa would have opened the score inside five minutes but he ended up heading Arthur Kiggundu’s cross from a good position wide. Issa Lumu could not connect well with Lwesibwa’s corner moments later as the hosts saw another chance go to waste.

George Ssenkaaba saw a number of his chances, including a bicycle kick, and a close-range shot, go out even though he had beaten Peter Magambo as he surged goalwards.

The rather wasteful home side, however, got an opener through Kambale in the first minute of added time before the teams went back for the half-time break.

Ssenkaba’s replacement Frank Kalanda, who came on as the second half started, could not convert a number of chances that came his way. His combination with Kambale midway through the second half could have led to a second goal but Charles Lukwago in KCCA’s goal was alert enough to deal with the danger.

As the Red Eagles were all destined for a win, a corner in the 88th minute by Hassan Musana altered everything as Lwanga headed home to ensure the tie ended in a draw.

Coach Wasswa Bbosa’s side, however, will remain unbeaten in the season as the Kasasiro Boys picked up a point after losing the last three games.

Cromwell Rwothomio scored all the goals for the Tax Collectors to condemn the struggling debutants to yet another loss.

The forward scored his first in the 18th minute from a corner delivered by Shafiq Kagimu. He scored the second in the same fashion as the first goal as he headed in Kagimu’s corner in the 21st minute.

Myda responded in the 70th minute when Norman Ogiki scored but Rwothomio stretched URA’s lead 10 minutes later after he was put through on goal by Steven Mukwala.

The home side got the second goal from the penalty spot in the first minute of added time through Ibra Nsimbe.

The Purple Sharks took the lead in the 12th minute when Kipson Atuheire scored before Joseph Nsubuga added the second one in the 28th minute.

The Jogoos responded in the second half as Abdalla Salim netted twice. He scored the first goal in the 54th minute before he added the second in the added time to ensure the tie ended in a draw.

Wed Feb 17 , 2021
Mamelodi Sundowns 2-0 Baroka FC: Downs shake off Bakgaga challenge to claim comfortable win Kermit Erasmus made a notable impact off the bench as he provided assists for both goals as the Brazilians stretched their lead at the top Two goals inside five second-half minutes from Gaston Sirino and Peter […] 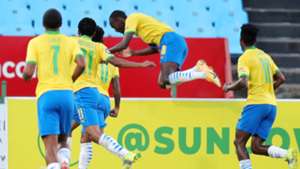