Simba will host their arch-rivals on Saturday at the Benjamin Mkapa Stadium and Matola believes facing continental rivals – Al Ahly, AS Vita, and Al Merrikh – in the Champions League prepared them well for the Kariakoo Derby.

“Our players have a great experience when it comes to matches of this kind. This season, we have played high profile games including the Champions League and we have prepared knowing very well it is going to be another big clash,” Matola told Azam TV.

“Our preparations have been good and we will not have any player missing the derby. It is going to be a tough game because it is a derby and in most cases derbies are tough and we as the coaches will accord it the respect it deserves.”

The tactician also spoke about the need to defend last season’s honours: “Our ambition is to defend the FA Cup and the league title and we cannot be successful if we are not going to win our matches. We have laid down our strategy to make sure we get a win in the derby.

“We still have a big chance to defend our title because we lead with four more points and we have two games in hand but we need the win and widen the gap.

“We also need to make sure we win the derby and a few other matches in order to be named champions early enough.”

The former AFC Leopards coach also dismissed the notion that they have not been applying squad rotation.

“We have been rotating players and if you look at the last five games in two weeks, for example, Perfect Chikwende played against Mwadui but was not named in the team that played against Kagera Sugar,” he continued.

“Jonas Mkude has featured in some cases and missed others and the same case has applied to Bernard Morrison. What is not possible is to make wholesale changes in the starting line ups because a winning team does not deserve such changes.”

Matola also noted there will be no need to change their playing style while tussling the traditional rivals.

“We will play our normal style, the entertaining one. We cannot change our style just because it is a derby,” he concluded.

“We will hope to have more possession because a team that does that will always have a chance of winning.”

There are four points separating Simba from Yanga heading into the match, although the champions have two matches in hand.

Osimhen & Koulibaly or Kessie & Bennacer: Who misses out on the Champions League?

Fri May 7 , 2021
The Serie A title race may be decided, but several of the continent’s players are expected to play crucial roles in the top four tussle Inter Milan may have motored to their first Serie A title in over a decade but what’s happening below this year’s Scudetto winners is arguably […] 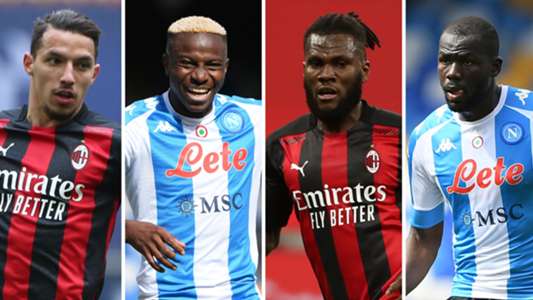