The Spurs captain was unavailable for the team’s latest European outing away at Wolfsberger, raising doubts over his fitness once again

Jose Mourinho hinted at a fresh injury blow for Harry Kane after leaving the Tottenham striker out of his Europa League squad on Thursday night.

Kane was not named in Mourinho’s final 23-man squad for Tottenham’s trip to Wolfsberger in the first leg of their round of 32 tie, with Gareth Bale and Son Heung-min tasked with leading the line in his absence.

Prior to the contest, the Portuguese coach suggested that the Spurs captain’s omission was fitness related, and he could now also be a doubt for a Premier League meeting with West Ham at the weekend.

Asked to discuss his starting XI prior to the clash with Wolfsberger, Mourinho told BT Sport: “[The team] could be even stronger with Harry Kane, Gio Lo Celso or Sergio Reguilon, the players that couldn’t travel.”

The Tottenham boss added on the importance of progressing in the Europa League: “You have to look at this competition with very strong eyes, very strong minds and a great desire.

Kane was enjoying another fine individual season at Spurs before injuring both of his ankles during a 3-1 defeat to Liverpool in the top-flight on January 28.

The England international missed subsequent losses against Brighton and Chelsea, but returned to action earlier than originally expected for an encounter with West Brom earlier this month.

Kane scored in the 2-0 victory over the Baggies, and found the net again a few days later after coming off the bench during a 5-4 reversal at Everton in the fifth round of the FA Cup.

He was back in Mourinho’s starting XI as Spurs were beaten 3-0 by Manchester City on Saturday, but it remains to be seen whether he will feature at the London Stadium in three days’ time.

Tottenham fans will hope that Kane doesn’t miss any further matches heading into the business end of the season, with a top-four finish still up for grabs in the Premier League along with Europa League and Carabao Cup honours.

The 21-year-old has hit 21 goals in 32 appearances across all competitions already this term, and Spurs have generally lacked a cutting edge in the final third when he’s been unavailable.

Thu Feb 18 , 2021
Both clubs may still end in the bottom three but the arrival of the Nigerian and Senegalese stars have given them renewed optimism of beating the drop Fulham and West Bromwich Albion have been given a glimmer of hope in the fight to avoid Premier League relegation. Scott Parker’s side, regularly praised […] 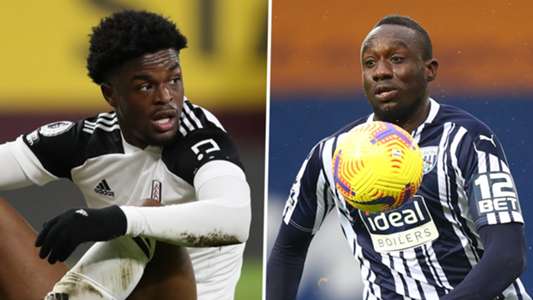