Kaizer Chiefs coach Gavin Hunt is approaching Saturday’s Soweto derby against old foes Orlando Pirates at Orlando Stadium without reading much into what happened in two previous encounters they faced the Buccaneers in earlier this term.

Chiefs were convincingly beaten by Pirates in back-to-back MTN8 semi-final legs, first losing 3-0 before succumbing to a 2-0 defeat in the home fixture as the Buccaneers marched forward to win the competition.

It was a humiliating experience for Amakhosi but Hunt does not want to go into Saturday’s match thinking about those matches, as he also underplayed the impending Soweto derby as just “like any other game.”

“Obviously disappointed with what went on before but that’s gone and we can’t think about it now and we look forward and try to be positive and play in a way I think we can get a positive result. Right now that is all we are thinking about and not thinking about what happened before,” Hunt told the media.

“No need for us to say too much. We are going to treat it like any other game. Obviously, I know expectations are on the place but we have to try not to do anything out of the ordinary and hopefully, as I said, we can improve from the last time we played. That’s all we can do.

“It’s important that we play properly and do well with the ball and without the ball. We have to improve certainly. It’s an ongoing process.”

Hunt’s sentiments of not paying attention at MTN8 matches could be informed by the fact that they have performed better than Pirates in both team’s last five games.

Amakhosi have won three of their last five games and shared the spoils twice while the Buccaneers have won two, drew as many and lost to struggling Black Leopards.

On Saturday, Hunt will again be coming up against players he coached at Bidvest Wits, and are now the mainstay at Pirates.

Bafana Bafana captain Thulani Hlatshwayo, midfielders Deon Hotto, Terrence Dzvukamanja and Thabang Monare were playing under Hunt just four months ago at Wits and the Chiefs coach is aware of what awaits him at Orlando Stadium.

“They have had a great start and have won a trophy already. They made some very good signings, players that I know very well. They fitted in very well and they are certainly taking the team to another level, that’s for sure. What’s going on there I don’t know, I’m trying to concentrate on what we do,” said Hunt.

FIFA 21 Team of the Year

Thu Jan 28 , 2021
Messi misses out but Ronaldo, De Bruyne and Fernandes were amongst the players named in the FIFA 21 Team of the Year Source of the article 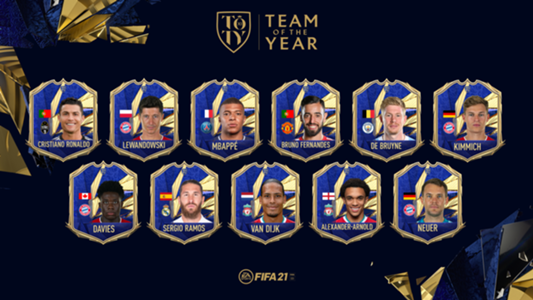