Kaizer Chiefs have informed the Caf that they cannot honour their upcoming match against Moroccan giants Wydad Casablanca.

This comes after Africa’s football governing body announced that the Champions League Group C match between the two teams will be played on Friday in Cairo, Egypt.

The Soweto giants have now released the following statement on their official website explaining that they won’t be able to face Wydad due to travel logistics and bureaucracy issues.

“The emailed letter received suggests that the game between the two teams be replayed on Friday, 19 February at Al Salam Stadium in Cairo, Egypt,” a club statement read.

“Chiefs have since responded to the letter, citing a few impediments that will hinder us from honouring the proposed new fixture date, which is in three days’ time.

“The two main reasons are visa challenges and travel logistics. Given the three days’ notice to play the match, the club will still face the similar challenges from the Egyptian Embassy because it takes a minimum of seven working days to get approval for visas that will enable us to travel to Egypt.

“Securing flights at this late hour will also pose a challenge given that some airlines are not operational due to Covid-19 restrictions.

“Based on the above, this may have a negative impact on the Champions League game against Horoya AC scheduled for Tuesday, 23 February 2021.

“The club then proposed that the game be played at a later stage, as this will enable us to honour all the Champions League games on 23 February and 5 March.”

Chiefs’ site also confirmed that their PSL match against AmaZulu FC which is scheduled to be played on Wednesday will go ahead.

“Meanwhile, Chiefs will on Wednesday, 17 February face AmaZulu in a PSL fixture at FNB Stadium,” the club added.

Amakhosi will be looking to bounce back to winning ways when they face Usuthu after they were stunned by National First Division side Richards Bay in the Nedbank Cup two weeks ago.

Goals from Austin Dube and Siyabonga Vilane inspired Richards Bay to a 2-1 win over Chiefs, who netted a late consolation goal through Leonardo Castro.

Tue Feb 16 , 2021
The Yellow Army are officially out of top-four race after their 4-0 defeat against Hyderabad… Kerala Blasters were officially knocked out of the play-offs race by Hyderabad FC after the Nizams registered a thumping 4-0 win over the Yellow Army on Tuesday. With the convincing performance, Manuel Marquez’s side moved […] 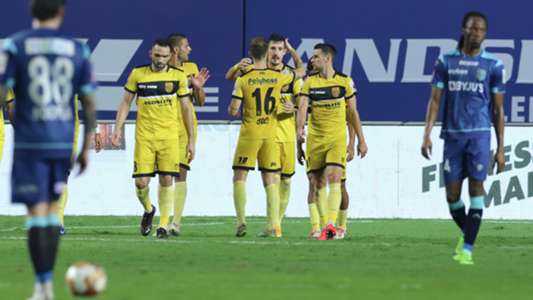