After Middendorp led Chiefs to an agonising near-miss of the league title last season, Kambole says it will be an “emotional game” coming up against their ex-coach.

Amakhosi face a Maritzburg side that has improved under the German and has not lost in two straight games, including recording their first win of the season in their last game against Bloemfontein Celtic.

“Coming from the win I think they are motivated so they are not going to be easy. We just have to go all out and make sure we win the game. It’s going to be an emotional game [facing Middendorp] but business is business so we will talk on the pitch,” Kambole told Chiefs’ media team.

While Maritzburg are satisfied after notching their first victory of the campaign, Chiefs are equally high in confidence after a history-making Caf Champions League outing.

They beat Angolan giants Primeiro Agosto 1-0 on aggregate to reach the tournament’s group stage for the first time ever.

This was on the backdrop of the Soweto giants going for six consecutive PSL games without tasting victory, and they last won a match in October 2020, their only victory in eight league matches.

Amid all their domestic woes and mounting pressure, Gavin Hunt became the first coach to guide Amakhosi into the Champions League group stage.

Kambole feels their Champions League performance will help them pick up form on the domestic front.

“I’m happy with the result [in Angola], I’m happy that we have qualified to the group stage of the Champions League,” said Kambole.

“It wasn’t an easy game. We have not been doing well in a couple of games but we fought in Angola and this game has given us confidence [going into] the next game.

Kambole has managed just a goal for Chiefs in 21 appearances across all competition since arriving at Naturena in July 2019.

But the Zambian, who has featured in just two league games this season, feels that he is on the path to improve his personal fortunes.

“We just have to continue working extra hard, believing in what I can do on the pitch. I am on the right track and by the grace of God I will start scoring and things will get back to normal,” Kambole said.

Thu Jan 7 , 2021
The Gunners boss has expressed his delight with the development of the 19-year-old attacker at Emirates Stadium Arsenal manager Mikel Arteta has praised Folarin Balogun for the progress he has made since joining the club.  The forward teamed up with the Gunners’ youth team in 2008 and was handed his […] 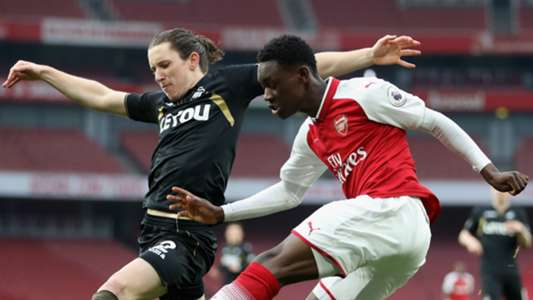