Former Serbian world No. 1 Jelena Jankovic has left the door open for a potential return to tennis after playing a mixed doubles match on the opening of Adria Tour. On Friday, Jankovic teamed up with world No. 1 Novak Djokovic — the man behind the Adria Tour project.

Jankovic and Djokovic clashed against fellow compatriots Nenad Zimonjic and Olga Danilovic in a mixed doubles match in Belgrade and ended on the winning side. It was a tight contest from the beginning until the end but Jankovic and Djokovic found a way to claim the win, having beaten former doubles world No.

1 Zimonjic and rising Serbian star Danilovic 7-6 (5). Jankovic’s last appearance on the WTA Tour was in 2017, when she picked up a first round loss at the hands of Czech Petra Kvitova at the US Open. Since then, Jankovic has taken her time to heal her injuries and focus on some other things.

“This is the first time I’ve held a tennis racket in a very long time and I was as overjoyed as a child in a candy shop,” Jankovic told a news conference, as revealed on Reuters. “It felt like the very first time.

I was sidelined by a back injury which not only hampered my tennis career, it was so bad I couldn’t walk properly or sleep. “I’ve made a full recovery but I don’t know if this is a comeback. The door is open, I never officially retired but I am living a different life now.”

Jankovic, now 35 years old, absolutely enjoyed returning to the court. “It was amazing,” Jankovic said. “But making a tour comeback is a very different matter and a painstaking process.”

Djokovic was happy to see Jelena Jankovic back in action

17-time Grand Slam champion Djokovic was more than happy with how it all went on Friday in Belgrade.

“Thank you all for coming in large numbers. I think we are the only ones in our sport who can bring so many people to the match at this moment. Thanks to Jelena for responding to the call,” Djokovic said. “I would like to pay tribute to all the victims of the coronavirus.”

Novak: “Thank you all for coming in large numbers. I think we are the only ones in our sport who can bring so many people to the match at this moment. Thanks to Jelena for responding to the call
I would like to pay tribute to all the victims of the c’virushttps://t.co/rAzSAZlptH — C Kristjánsdóttir ●🐊 (@CristinaNcl) June 12, 2020

It remains to be seen if 2008 US Open runner-up Jelena Jankovic will decide to make a comeback to tennis.

Fri Jun 12 , 2020
The 22-year-old left-back has been given the all-clear to play again following a heart scare U.S. men’s national team defender Antonee Robinson has returned to training with Wigan Athletic, having been inactive since January. The 22-year-old was found to have an irregular heart rhythm as he underwent a medical before […] 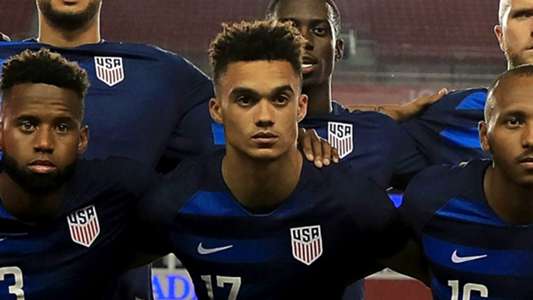