Luis Machado and Federico Gallego got on the scoresheet for the Highlanders and Roy Krishna’s second-half goal wasn’t enough for the Mariners to come back into the game.

“The good result is all because of the players. They worked very hard, especially our supporting staff, physios (physiotherapists), team manager, technical director – everybody worked together. We got these [three] points because of our collective effort,” said interim coach Khalid Jamil.

Having defeated Jamshedpur by the same margin in their previous game, Jamil has now won both his games in charge of the side since the departure of head coach Gerard Nus.

“It’s not about me. It’s about the players. I only motivated them and they played their natural game. That’s it,” the 43-year-old insisted.

The Highlanders are the only side to defeat the top two teams on the table this season but shrugged off the tag of ‘giant-killers’.

Up against one of the strongest defences in the league, Jamil admitted that his team did not have it easy on the field. He said, “It was very tough. They have a good defensive line but we used the experience of [Luis] Machado and [Federico] Gallego, Khassa [Camara]. So we got these wonderful two goals.”

Both Machado (60′) and Gallego (81′) scored in the second half and  ATK Mohun Bagan have scored 12 out of their 13 goals after the break. Jamil revealed that he asked the players to focus on their game at the break.

“I just told my players that concentration should be good and play your natural game. They did what I told them to do,” Jamil said.

With 18 points from 13 games, NorthEast United stand fifth on the table, level on points with Hyderabad.

Tue Jan 26 , 2021
Orlando Pirates 1-1 TS Galaxy: Wasteful Bucs drop points ahead of Soweto Derby The Buccaneers failed to take their chances in their clash with the Rockets and they will be looking to return to winning ways against Chiefs Orlando Pirates let a lead slip to draw 1-1 with TS Galaxy in […] 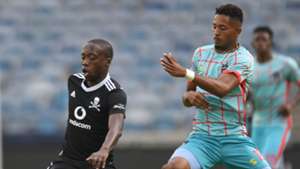