Eberechi Eze lamented Crystal Palace’s mistakes after a 2-1 defeat to Leicester City on Monday night, despite putting up a ‘good performance’.

Wilfried Zaha gave the Eagles a 12th-minute lead, but the Foxes levelled matters in the 50th minute through Timothy Castagne.

Ten minutes before the end of the game, Kelechi Iheanacho completed the comeback for the hosts with his strike leaving goalkeeper Vicente Guaita stunned.

Victory for Brendan Rodgers’ team was a massive boost to their Champions League qualification hopes, and Eze felt his team failed to assert their authority at the King Power Stadium.

“It’s a difficult one,” Eze said in his post-match interview per Crystal Palace website.

“I think the boys worked hard. We put in a good performance but again, if you make mistakes and you let them get chances, they are eventually going to get chances because they’re a good side.

“We’ve been working hard in training and preparing for this game for a while after the Chelsea game, so we were in a good position beforehand, but we are disappointed.”

Having turned provider for Zaha’s opener, Eze has now registered an assist for the first time in 10 English topflight outings, with the 22-year-old now joint-top for assists in the competition this season among Andros Townsend (four).

Following their latest setback, the Super Eagles prospect stated that the squad will work hard to comprehend why they could not hold onto the result.

“I was just waiting for him [Zaha] to make the move, and thankfully he was ahead of me,” he continued.

“We’ll have to look back and pick it apart. When you allow a team to get chances late in the game they are eventually going to take them, so it’s difficult.”

Alongside Zaha and Cheikhou Kouyate, the former Queens Park Rangers man was in action from start to finish.

Whereas, Ghana international Jordan Ayew – who was handed a starter’s role – was substituted for Townsend in the 78th minute.

Crystal Palace would be hoping to return to winning ways when they welcome Pep Guardiola’s Manchester City to the Selhurst Park on Saturday.

Tue Apr 27 , 2021
Both teams churned out hard-fought victories against their respective oppositions… Sharjah FC progressed to the Round of 16 of the AFC Champions League 2021 after defeating Iraq’s Al-Quwa Al-Jawiya 3-2 on Monday at the Sharjah Stadium. It was a historic night for the UAE Pro League club as they ensured […] 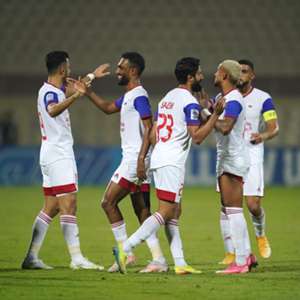