Competing in his third straight Masters 1000 final, an 18-year-old Rafael Nadal prevailed against Guillermo Coria 6-4, 3-6, 6-3, 4-6, 7-6 in five hours and 14 minutes in Rome 2005. It was the longest ATP final in the Open era and one of the most remarkable triumphs in a career of the 20-time Major champion, refusing to give up and lifting the trophy on his Rome debut.

It is hard to describe the level of tennis these two produced during this excellent encounter, pushing each other to the limits and always forcing that extra shot in the rally from the other side of the net in a ruthless baseline battle.

The Centre Court at Foro Italico had never witnessed a contest like this before, with two of the finest clay-courters giving their best for every point, covering the court fluently and efficiently and keeping the ball on the forehand wing as much as possible.

We saw four aces in the entire match and the winner had to emerge from the ultimate baseline clash, with almost 100 points reaching the ten-shot mark! Despite his amazing defense skills, Coria knew he had to find a different approach to overpower a teenager, trying to impose his shots and break Nadal’s rhythm with drop shots, net rushings and more risky strokes that would have given him the edge in the exchanges.

The Argentine was more successful in the shortest points but Nadal would gain the advantage in the more dramatic rallies to emerge as a winner and grab his second Masters 1000 title in a row after Monte Carlo. There were 37 break chances in total, with nine breaks of serve on each side and a massive opportunity for Guillermo to cross the finish line in the decider, standing a point away from a 4-0 lead that would have broken Nadal’s resistance.

Nonetheless, Rafa managed to bounce back and win a tie break 8-6, celebrating the biggest title in a career and gaining a massive boost for Roland Garros.

Coria drew first blood in game five when Nadal missed a backhand and cemented the lead with a backhand drive-volley winner in the next game.

Nadal had to work hard for every point, fending off a break point in game seven to avoid a double break deficit and keeping himself in contention. That became even more important when he broke back in the next game with a rare backhand winner, leveling the score at 4-4 and gaining the momentum for the upcoming games.

His forehand started to work better, holding in game nine with a winner from that wing and firing another one while on the return to steal the set 6-4 after rattling off four games! The youngster wasted a game point in the third game of set number two and Coria found the way to break him with a forehand drop shot winner, forging a 3-1 advantage with a solid hold a few moments later.

Rafa was ready to strike back, erasing the deficit with a break in game six thanks to a forehand winner, eager to repeat what he did in the opening set. Guillermo stayed composed and seized another break that gave him the necessary boost to drive him towards the set when Nadal gifted his serve at 3-5.

Rafa controlled the pace at the beginning of the third set, turning the screw to open a 4-0 gap but getting broken while serving for the set at 5-2. The ninth game was the longest of the match and Rafa seized another break, converting the eighth chance to seal it 6-3 and move closer to the finish line.

The Spaniard struggled with blisters on his left hand and Guillermo broke with a forehand winner in game five to open his second lead in the fourth set, serving to send the encounter into a deciding set at 5-4. Nadal created a break point but was denied after a backhand forced error, allowing Coria to take the set with a service winner after more than an hour.

The best was yet to come in the next hour and a half, though, with the final set turning out to be one of the most memorable ones on the Tour in the last 20 years. Guillermo was the better player on the court, racing into a 3-0 lead when Nadal netted an easy forehand, with two game points for what could have been a crucial 4-0 advantage.

The warrior inside Rafa had come alive again, fending them off to pull one break back with a drop shot winner. Coria netted a forehand in game six and his early lead was done and dusted, falling 4-3 behind when Rafa held in game seven.

The pivotal moment came in game nine when Nadal saved a break chance with a backhand slice winner that landed on the line, hitting a forehand winner to bring another game home and keep the pressure on his rival. Guillermo faced a match point in game 12, saving it with a great forehand attack and setting up a tie break after magnificent lob winner when the clock showed a five-hour mark!

The Spaniard won five out of six points to create a 5-1 gap, gaining two more match points after a huge forehand miss from the Argentine in the tenth point. To make things even more dramatic, Coria staved off both to level the score at 6-6.

However, Nadal was not to be denied, earning the fourth match point after a smash that Guillermo could have only returned into the net and moving over the finish line thanks to a volley error from his opponent in the next point.

“I’m thrilled; it’s my second Masters 1000 title and I played one of the toughest encounters of my life. I don’t know where I found the energy to come back from 3-0 down in the decider. The crowd was behind me and that gave me an extra boost that helped me make a comeback.

I was a little bit nervous at 6-5 in the match tie break, hitting that double fault but staying focused to win the next two points. The fifth set felt like a Davis Cup and against one of the best clay-courters in the world.

Still, the Davis Cup remains the ultimate competition. Every time I win a match, you ask me if I’m the favorite at Roland Garros. My level is good but maybe I will not keep it in the next two weeks. I will go to Hamburg tomorrow and I have one week off between Hamburg and Paris.”

However, Rafael Nadal was not to be denied, earning the fourth match point after a smash that Guillermo could have only returned into the net and moving over the finish line thanks to a volley error from his opponent in the next point.

Wed Jun 17 , 2020
The ATP Tour is set to get back underway in August at the Citi Open in Washington. from Daily Express :: Tennis Feed https://ift.tt/2zJTgCq Source of the article 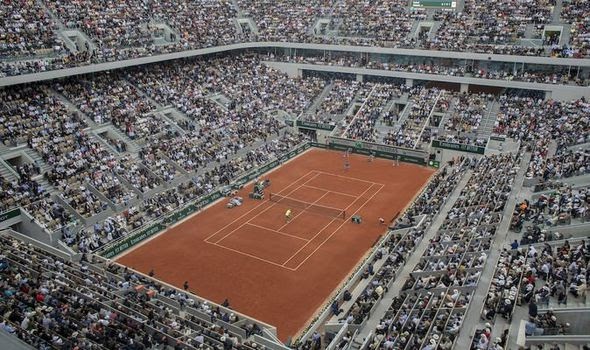