Jamshedpur were winless in five games before beating Odisha 1-0…

After back to back draws, Jamshedpur FC returned to winning ways as they edged Odisha 1-0 in an Indian Super League (ISL) clash on Monday.

With the result against Odisha, the Men of Steel have managed to keep a clean sheet in three consecutive matches and Owen Coyle credited the hard work of the players in training sessions for the achievement.

“I had to look into things. I had to change one or two things and we worked hard on the training grounds. Because we couldn’t be conceding the goals we did. That being said, we had one or two injuries. Dinliana missed a few games, he actually had to come off tonight as well. So I have to look at that. He is an outstanding player. A lot of players get praise in the league and rightly so but for me I don’t (know) if there is a better right-back in the league than Dinliana. I had him last year and he has been outstanding this year.

“So with one or two injuries, it was important to get the clean sheet because that gives you the confidence to go and win the games like we did tonight. 1-0 could have been two or three but three points is the most important thing,” opined the Jamshedpur boss.

The only goal scored in the match was credited to Jamshedpur midfielder Mobashir Rahman but the coach suggested that striker Nerijus Valskis had the last touch of the ball before it went into the goal.

“It was (Nerijus) Valskis’ goal, he had the final touch. All the boys know that he clearly had the touch. It was Valskis goal, he was outstanding tonight in the game. He is up and running again so it’s great news.”

After the win against Odisha, Jamshedpur have climbed up to the sixth position on the league table and are very much in contention for a playoff spot. The former Irish international wants to keep winning games in order to book a top-four berth.

“That is why it was important for us to win tonight, to keep the pressure on. The teams who are ahead of us have all the advantage. They are the ones with points. All we can do is try and win games, keep the momentum and try to make sure to get something to see about. That is what we are trying to do,” Coyle said.

Morgan and Press return to USWNT roster for SheBelieves Cup

Mon Feb 1 , 2021
The veteran attackers missed last month’s friendlies against Colombia but are now ready for the four-team tournament in Orlando Alex Morgan and Christen Press are back for the U.S. women’s national team as head coach Vlatko Andonovski named his 23-player roster for the 2021 SheBelieves Cup on Monday. Morgan was left […] 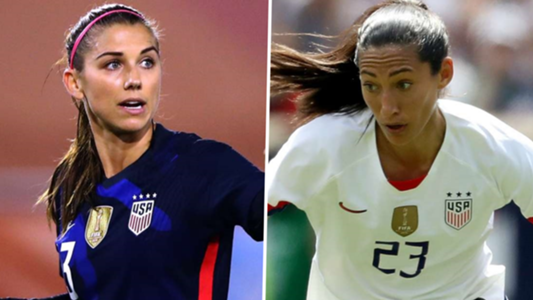