Al Ahly head coach Pitso Mosimane has anointed himself as the “Chosen One” as he leads the Cairo giants at the Fifa Club World Cup in Qatar.

The African champions face Al Duhail in their opening match on Thursday.

Following an early exit from the 2016 edition of the global club tournament with Mamelodi Sundowns, Mosimane is back but this time in charge of Al Ahly.

The ex-Bafana Bafana coach faces another opportunity to break barriers by guiding the Egyptians to their first ever Club World Cup title.

“It always looks impossible until somebody does it,” Mosimane told CNN.

“Can you believe that somebody from the township like me, from the background of apartheid, from the humble beginnings, can be the first person to win the Champions League in South Africa? And win it twice and become coach of the year on the continent.”

Inspiring for Mosimane is that he is yet to lose a match in 21 games since beginning work in Cairo in October 2020.

Victory over Al Duhail will see Al Ahly setting up a date with European champions Bayern Munich in the semi-finals.

Mosimane is basking under the tag of being the first sub-Sahara African coach to be appointed Al Ahly coach and boasts of himself as an anointed coach.

“I don’t want to dwell so much on why [it took long for a sub-Sahara African coach to take charge at Al Ahly]. But it has happened now. I’m the one. I’m the ‘Chosen One.’ And what brought me here was not a political movement,” Mosimane said.

“I was brought here because of the titles that I won because I’ve defeated Al Ahly twice and one of the top teams here in Zamalek. And they know me. They know my name … it has nothing to do with colour or politics.”

In his first coaching job outside South Africa, Mosimane’s ambitions are still high as he dreams of coaching in Europe in future.

He believes an African coach can successfully take charge of a European club.

“Is this a possibility? Yes,” said Mosimane. “We have to be realistic to say Europe doesn’t have a lot of African coaches. I don’t want to politicise this and make it a case of playing the race card, but some things need to be told as they are.

For now, the South African’s focus on Al Ahly’s participation in Qatar on the background of their best outing at the Fifa Club World Cup being a bronze medal in 2006.

Thu Feb 4 , 2021
The South African is hoping the Red Devils can take hope from the achievement of the Foxes when they begin their campaign on Thursday Pitso Mosimane believes that Al Ahly can draw inspiration from Leicester City’s remarkable Premier League feat as his side prepare for their Fifa Club World Cup […] 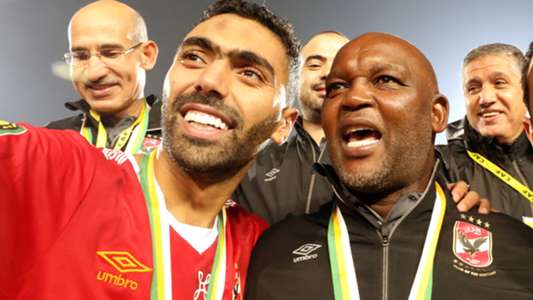