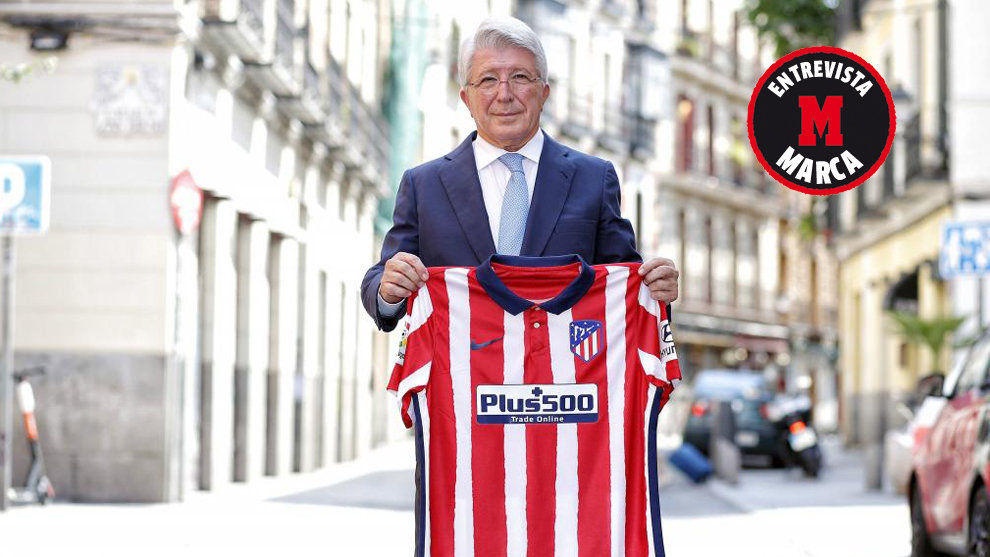 After securing third place in LaLiga Santander, Atletico Madrid president Enrique Cerezo is very satisfied with his club’s achievements so far this term and is looking forward to what lies ahead in the remainder of the Champions League.

Cerezo spoke with MARCA about the upcoming clash against RB Leipzig, while he also discussed the transfer rumours surrounding Jan Oblak and Joao Felix’s first season in Spain. 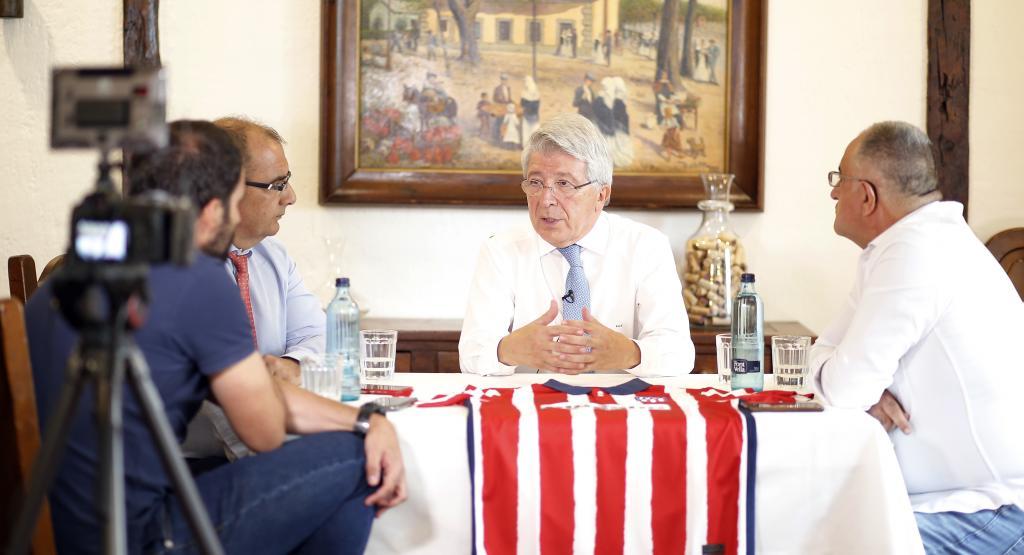 A quite unusual league campaign has just come to an end. How would you sum up the season?

“The summary of our season is that it was very good. We’ve finished in the top three, which is what we always aim for at the start of the year. In the Cop del Rey we had an off-day in Leon and Cultural knocked us out, deservedly so by the way. Now we’re hoping to go all the way in the Champions League. We’ll see what happens.”

The league campaign was heavily affected by coronavirus. How was it for you?

“It’s been a problem for everyone around the world, not just Spain. They were three long months without any activity and it took its toll. Fortunately, after the coronavirus break we were lucky to have a good reaction from the team and finish the campaign strongly. That’s why we’ve managed to finish in the top three.”

Lockdown has meant a huge financial blow for all sectors and football is no exception. Was is more important than ever to qualify for the Champions League and soften the blow a bit?

Were people at the club nervous about being in sixth during the break?

“There are always nerves throughout the whole league season. We had an unusual start to the season, but we recovered slowly. We lost games that we shouldn’t have and drew games that we shouldn’t have, but in the end they’re things that happened. We were sitting sixth before the pandemic, but after the break we made a great comeback by playing well, scoring goals and really putting on a show. In the end we achieved one of our goals.”

If you had to choose a standout player, who would it be?

“I think all the players are important, but, without doubt, Marcos Llorente has really excelled since the Liverpool game. In the end, some players have really good seasons and other not so much, and there are moments when some are playing really well and others aren’t. It’s perfectly human to have these good and bad periods.”

The Atletico fans are asking if Jan Oblak, who lost out on the Zamora Award to Thibaut Courtois this year, is staying at the club or not.

“I think winning the Zamora Award or finishing second depends on many circumstances throughout the 38 LaLiga matches. There are times when you concede goals that should never have gone in and other times when there are goals that could have gone in but didn’t. For me, Oblak, and I’m speaking as a fan, is the best goalkeeper in the world. In respect to Courtois, he’s another one of the great goalkeepers in the world and fortunately both of them have worn our strip and we’ve won trophies with both of them.”

So, is Oblak staying or going?

“I always say that Oblak has a contract with Atletico and he’s the best goalkeeper in the world. It’s not unusual that he attracts offers from other big clubs.”

“I’ll say what I always say. Oblak has a contract, he’s an Atletico player and that’s that.”

Is Oblak Atletico’s biggest asset at the moment?

“We have a lot of players, the squad as a whole is our biggest asset.”

But maybe Oblak is the top guy in the group?

“Oblak is a magnificent player and in his position, undeniably, there is no one who is better than him at the moment.”

What do you think of Joao Felix’s season?

“It hasn’t been easy for him because it’s been his first season. He came with a huge level of expectation and I think he’s fulfilled that. We’re all happy with Joao Felix’s performances. I think that next season it won’t be a hope that he does well, but a guarantee. I hope that in these Champions League games he shows what a great footballer he really is.”

Joao Felix will be the main focus in the Champions League when he returns home to Lisbon. Do you trust in him?

“Totally. I think he’s really excited and happy to be playing in Lisbon. There could be great nights of football there.”

Up until now he’s has good moments and good matches, but hasn’t been consistent. Is this his big opportunity this season?

“I think so, but you have to keep on thing in mind. When people say that he’s played well one day and another day he hasn’t, you have to realise that players like him aren’t marked by just one opposition player during a game. It could be two, three or even four. If he gets by one, he could get by the second or third, but if you are given that much attention then it makes things very difficult and Joao Felix has come out on top on many occasions against marking like this, which is common from any team. His quality can be clearly seen and he has shown it on the pitch.”

There has been a lot of pressure on his shoulders this season, but he’s a long-term signing isn’t he?

“You have to remember that he’s only 20. He’s a player with a bright future and we’re very proud to have signed him.”

It seems like not many players will be signed this summer.

“Without doubt, the coronavirus is going to reduce the number of signings we can make. This isn’t just for Atletico, but for all clubs in Europe.”

Is it just because of coronavirus or because Atletico don’t need to make many changes?

“I think that we don’t need many players. We have a young team with a great future ahead of them. However, we need to keep in mind that we play in a league that’s very financially demanding. This year, due to the lack of spectators, sponsors and other things, the financial benefits haven’t been the same. All of this makes a difference, but not just for Spanish clubs. It’s for all clubs in Europe. It isn’t just a problem for us, but it’s a financial issue that will be affecting many other teams.”

Diego Simeone labelled this season as a period of transition for the team. What do you think of how they’ve done?

“The first thing I’ll say is this. Diego Pablo Simeone is the number one. Whatever he says or does, for us, is done properly. He’s right. We have a very young squad, with great potential. And with the situation with COVID-19 in terms of signing and bringing in new players, he’s right. Of course, we’ll bring in whoever we can, but there won’t be a lot of movement. This isn’t because I’m saying it, the coaches have said the same.”

Were Atletico lucky in the Champions League draw to get a team without much history in Europe?

“RB Leipzig are a very good team, just like Liverpool were. And what happened with Liverpool? What happened with Chelsea? With Barcelona? They were great teams who we eliminated. Look, I don’t think RB Leipzig are at the same level as those Chelsea, Barcelona or Real Madrid sides we’ve faced over the years, but you can’t be complacent at all because it could come back and bite you.”

What do you think of RB Leipzig?

“We could definitely make the semi-final. There is, however, a difference between what people say and what actually happens in football, whether that’s positive por negative.”

“Some say that the team who knock out the holders are then the champions of Europe and we did just that. Logically we should be champions.”

Is it time to change things in football, which was maybe in a bubble?

“I think this so-called bubble has always existed in football, but the game has always moved forward. Now, thanks to LaLiga, everything is controlled financially and they’re doing a great job making sure every club only spends what they’re capable of spending.”

Could players in the squad be sold off?

“According to LaLiga’s economic plan, we need to follow a set of guidelines. If we aren’t making enough money, of course we’ll need to sell a player. But it’s far too early to be talking about that. Firstly, because we don’t know when the league will start even though we think and hope that it’ll be on September 12. We still don’t know if coronavirus will grow or not. Under these circumstances, you can’t make any assumptions at the moment.”

When do you think the gap between Atletico and the big two of Barcelona and Real Madrid will be closed?

“It’s a financial issue. Barcelona and Real Madrid are clubs who bring in a huge amount of money, practically twice as much as we do. However, 10 years ago we were working with a ridiculous budget and today we’ve got around 400m euros for the upcoming season, which is very positive.”

Tue Jul 28 , 2020
The DR Congo international has reflected on his side’s performance against the Bluebirds and hopes they can complete the job at Craven Cottage Fulham midfielder Neeskens Kebano has shifted his focus to their Championship second leg semi-final playoff with Cardiff City on Thursday. The Democratic Republic of the Congo international […] 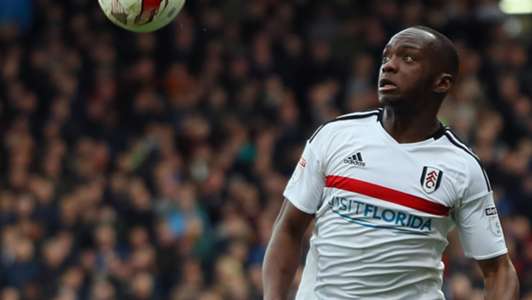