Kelechi Iheanacho has urged Leicester City to seize every opportunity to get an early goal when they take on Brentford in the fourth round of the FA Cup tie on Sunday.

The centre-forward will be expected to lead the Foxes attack in the absence of Jamie Vardy, who is set to undergo surgery.

The Nigeria international is no stranger to playing against the Bees after scoring in their previous meeting last season.

Iheanacho has advised the King Power Stadium outfit to be fully focused in the encounter in order to ensure they claim the victory and progress to the next round of the tournament.

“We played them last time in the FA Cup and probably the team has changed a little bit,” Iheanacho told LCFC TV via video call.

“They were a good side last time we played them, and they have good quality players as well, so they might hurt us if we’re not careful. We need to just be ourselves, play our own game and make sure that we get the win.

“We need to take our chances when they come in the first half, so they don’t take us to the second half.

“They’re at home, and sometimes when you don’t take your chances, it gets hard in the second half. You have to cope with it, so we need to take our chances when they come.”

Iheanacho recalled his strike against Brentford in last term’s outing, when he fired his effort into the back of the net after a fine combination with James Justin and Dennis Praet.

“Of course, it’s a good memory. We won that game and we went through, and I scored. I have to mention that great pass from Dennis Praet. It was absolutely outstanding, that pass,” he continued.

“That was the pass that brought the goal, and it was a great cross from JJ [James Justin] to pick me out, and I finished.

“It was a good game. They gave us a tough game, they nearly scored but Wardy [Danny Ward] kept us in it. It was a great game and we finished on top.”

Iheanacho has made 18 appearances for Leicester City this season, scoring three goals and providing four assists.

The centre-forward will hope to add to his tally this season when they take on the Brentford Community Stadium outfit.

Iheanacho has been with the Foxes since the summer of 2017 when he teamed up with the side from Manchester City.

Sat Jan 23 , 2021
Mamelodi Sundowns 1-1 Swallows FC: Late goal denies Masandawana victory Erasmus ended the Brazilians’ two-match goal drought, but his strike was not enough to earn the team a victory in Tshwane Swallows FC showed character as they fought back to hold Mamelodi Sundowns to a 1-1 draw in a PSL match […] 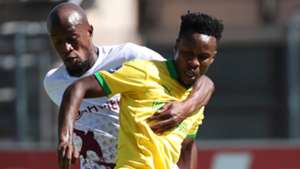