The England U21 international, now playing in Ligue 1 with Dijon, insists he has no regrets over his decision to turn his back on the Blues

Ex-Chelsea youngster Jonathan Panzo has revealed why he left Stamford Bridge, admitting “I needed to get out of my comfort zone”.

Panzo spent eight years rising through Chelsea’s academy ranks before departing for Monaco in 2018 at the age of 17.

The England U21 international only lasted two seasons at Monaco, who accepted an offer for the defender from Dijon in 2020, but he insists he has no regrets over his decision to turn his back on the Blues at the start of his career.

“It was a brave decision, but I felt I just needed to get out of my comfort zone,” Panzo told The Mirror. “It was a chance to see more of the world, see different cultures and a different style of playing the game.

“Obviously it was brave for me but I feel it was worth it. It showed me a lot of new things, it made me mature at a young age.”

How did Panzo get on at Monaco?

Panzo made his senior debut for Monaco in a 1-0 Coupe de la Ligue victory over Lorient in December 2018, but only appeared in two further matches before being shipped out on loan to Cercle Brugge.

The 20-year-old impressed enough during his spell in Belgium to attract Dijon’s attention, and Monaco were happy to sanction his departure on a permanent basis due to the fact they could not promise him regular minutes.

Despite the fact he ultimately failed to make the grade at Stade Louis II, Panzo looks back on his time with the club fondly and says he learned a great deal from Radamel Falcao and Cesc Fabregas – two players who have also enjoyed spells at Chelsea.

“Falcao, obviously him being a striker and me being a defender, he helped me a lot,” he said. “Just telling me certain things which helped me in a footballing sense, giving me tips and things like that.

“Fabregas, he speaks English and he remembered me from Chelsea which was quite nice as well. He’s got so much knowledge in terms of on the ball and off the ball stuff, so both of them helped me a lot to be fair.”

Panzo has settled into life at Stade Gaston Gerard quickly, making 14 appearances for David Linares’ side across all competitions in the first half of the 2020-21 campaign.

He played the full 90 minutes of a 4-0 defeat to Paris Saint-Germain in October, and although he failed to keep Kylian Mbappe and Neymar quiet, he says he took a lot from the experience.

“It was a great challenge,” said Panzo. “It sets the level. That’s the kind of level I want to be playing at, but from my level to that level, there’s a big difference at the moment. It always make me want to work hard so I can look at those players and say, ‘that’s where I want to be’. It was great to experience playing against those kind of top players.”

Sun Feb 14 , 2021
Interestingly, the Pirates coach’s remarks are contrary to what his boss Josef Zinnbauer feels about the playing surface and travelling Orlando Pirates assistant coach Fadlu Davids is refusing to complain about the challenges they have encountered in Botswana ahead of Sunday’s Caf Confederation Cup play-off, first leg clash against Jwaneng […] 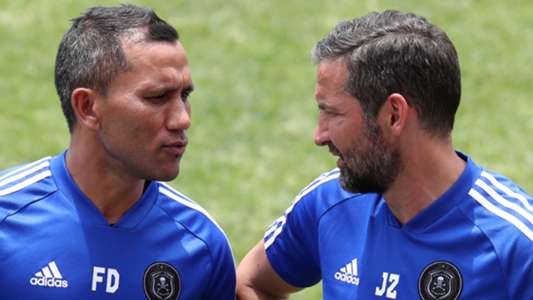