Edinson Cavani has revealed he is loving life at Manchester United and is fully integrated into a squad he joined last year.

The striker joined the Red Devils on a free transfer last October after leaving Paris Saint-Germain at the end of last season.

At 34, he is heading into the twilight of his career but he has already shown his value to United with some important goals – and is happy with life at Old Trafford.

“I get to experience the club at closer quarters, and to share a dressing room with these players, these forwards and these young players,” Cavani told the club’s official website. “I love it and I’m excited by it.”

United boss Ole Gunnar Solskjaer has spoken of the importance of Cavani’s experience in what is an otherwise inexperienced attack.

The Uruguay international has said he will not force his opinions on others, but is happy to offer words of advice if needed.

“As someone who is a bit older, there are things that you notice that maybe they, as younger players don’t quite see yet,” Cavani said. “Just normal everyday football things. I’m here to give the best I can give of myself and to occasionally offer my opinion on things.

“I don’t really like to just give out advice. I prefer to support and be there to help. I like to give my best. If someone would like to take something on board as an example, something that I’ve done, then yes, by all means.”

The forward joined United with the campaign underway, so had no pre-season to adapt to his team-mates and was forced to jump straight into what was a congested calendar.

Solskjaer eased him in with a series of substitute appearances, with his first goal coming from the bench in a 3-1 win at Everton.

It was against Southampton towards the end of November that United fans were shown why the club signed Cavani, as he scored twice in the final 16 minutes to seal a 3-2 win.

He has chipped in with a further four goals – three of which have come in the league as United have put themselves in the title mix.

What does the future hold for Cavani at United?

Cavani signed a one-season deal when joining United last summer, but he has settled in well at the club and talks have begun over an extension.

His assertion that he is loving life at Old Trafford offer hope that he would be happy to take up the extension clause that United have in the deal, and Solskjaer is positive talks will bear fruit.

Sat Feb 20 , 2021
The promising United States international defender endured a Champions League outing to forget against PSG, but time is still on his side Sergino Dest has been warned he “needs to learn” after enduring a nightmare Champions League evening against Kylian Mbappe, but Barcelona boss Ronald Koeman says he will be […] 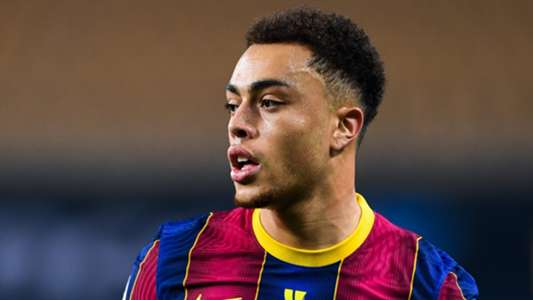