The Gunners midfielder came under fierce criticism for his red card against Burnley in December, but has responded in impressive fashion

Mikel Arteta has revealed Granit Xhaka feared he was going to be the target of more abuse from sections of the Arsenal fanbase following his sending off against Burnley and has credited the midfielder for the way he has responded to the incident.

Xhaka clashed with Ashley Westwood during the 1-0 defeat by the Clarets in December and was dismissed after grabbing the Burnley star round the neck and throwing him to the ground.

Arsenal were well on top at the time and looked certain to go on and take all three points, but the game swung after the red card and Burnley went on to snatch victory in the closing stages.

The incident came just over a year after Xhaka’s Arsenal career had been plunged into doubt following his dramatic clash with Gunners fans during a 2-2 draw with Crystal Palace at Emirates Stadium.

The Switzerland international – who was Arsenal captain at the time – was jeered off the pitch after being substituted by former boss Unai Emery and reacted furiously, gesticulating at the Arsenal fans and telling them to f*ck off.

Emery stripped Xhaka of the captaincy after the incident and the 28-year-old had looked certain to leave the club, until Arteta arrived and convinced him to stay.

The midfielder has thrived under the Spaniard, but the red card against Burnley earlier this season threatened to derail all his hard work – with his temperament once again being called into question and some supporters again targeting him with abuse online.

But Xhaka has responded well and has arguably played his best football in an Arsenal shirt since his return from suspension, something Arteta believes shows his determination to succeed in north London.

“He has had two big episodes,” said the Arsenal boss. “You can maybe overcome one of those, but I think the second time it really shocks you and he said: ‘I don’t want to go through that again’.

“But this is why we are here, to try to support our players. I think the club was exceptional giving him all the support. We try to do the same, the team-mates did the same, and he has come through again.

“Now he is getting a lot of praise, the way he is playing, and it is down to his character. It is down to as well how much he wants to succeed at the club.”

Xhaka and summer signing Thomas Partey are beginning to form an impressive partnership in the heart of the Arsenal midfield, with the pair complementing each other’s game well.

They were excellent again at Wolves on Tuesday night and were dominating the match before the red card to David Luiz turned the contest on its head just before half-time.

Arsenal went on to lose the game 2-1, their first league defeat of 2021, but Arteta felt there were many positives to take away, with the performance of Xhaka a particular highlight.

“I thought he was excellent,” said the Spaniard. “He has been really consistent. I think he is improving game by game.

“Then there is his leadership level as well, he has matured a lot as a player and he has got a big importance in that dressing room. On the pitch, I think he is doing things much, much better than before as well.

“He is a really important player for us. Since I have been here I think he has played almost every game – and there is not a better way to show how much you like and you value a player than to give him minutes on the pitch.”

Arteta added: “His balance with Thomas is getting stronger, they haven’t played together much, and that chemistry has to flourish.

“But I think they make each other better and we have a good balance between left and right footers in those spaces as well.”

Fri Feb 5 , 2021
David Webb was the man to take a promising midfielder to the John Smith’s Stadium, with a talented 20-year-old now thriving in north London Arsenal are benefitting from Emile Smith Rowe getting “bullied” in the Championship during a loan spell at Huddersfield, says David Webb, the man who took a […] 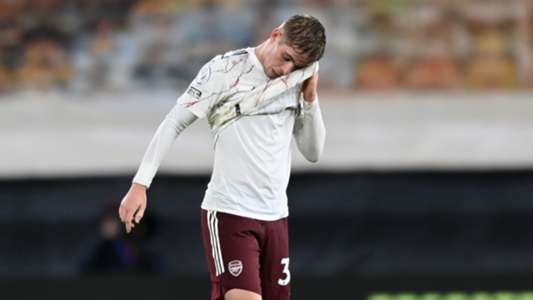