Crystal Palace manager Roy Hodgson thinks Eberechi Eze and Wilfried Zaha have a good rapport because of their similar skills, abilities and strengths.

Eze has settled in well at Selhurst Park since he completed a permanent switch from Queens Park Rangers in August and he has formed a solid partnership with Ivory Coast star Zaha, thanks to their playmaking skills.

On Saturday, the Nigerian descent came off the bench in the first half to score a wondergoal that sealed Crystal Palace’s 2-0 win over Sheffield United, a strike he has described as his best in South London.

When asked about the relationship between Zaha and Eze after the game, Hodgson said: “I think the rapport will revolve around the fact that they’re both so very, very good on the ball.

“When they receive the ball, their footwork is so good, their ability to quickly change pace and eliminate an opponent – they share that. They share that ability.

“They share that skill, which is obviously a very, very important skill.

“Both of them have got the strength and the power that when they’ve eliminated their opponent, they can keep on the ball, they can keep going, they can attack the next one.

“You’d have to ask Eberechi how much stimulus he’s getting and how much inspiration and knowledge he might be getting from playing with Wilf.

“I think personally that the whole of the team are helping him improve his game. He realises as a player that is still quite young and has been a major sensation in the Championship, something had to improve and he had to make one further step up when he comes into the Premier League.

“But he’s a young man and has made it very clear that he wants to do that, and what pleased me most about his performance today, strangely enough, was that at 2-0 up at half-time having scored such a wonderful goal, in the second half he showed the intensity and the concentration and determination to defend properly to make certain we weren’t under the cosh in any way and at a risk of losing our 2-0 lead.”

Crystal Palace are 14th on the Premier League table and the African duo will be targeting a win when the Eagles travel to Wolverhampton Wanderers for their FA Cup fixture on January 8.

Sun Jan 3 , 2021
36′ GOOOAAALLL! Golemic converts from the spot kick and makes it 2-2! Handanovic dived the right way, but there was too much pace on the shot and it is fired into the bottom right-hand corner of the net. 34′ VAR award the penalty, as the referee had to go and […] 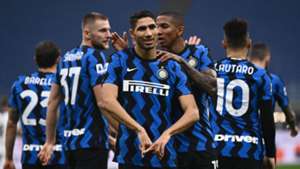