Fabrizio Ravanelli has said that he will try to sign Gonzalo Higuain from Juventus if Marseille appoint him as sporting director.

With OM struggling to find a replacement for Andoni Zubizarreta, the former favourite of the Velodrome has thrown his hat into the ring and has suggested that he will target big names in order to help the club compete in next season’s Champions League.

One man who Ravanelli believes he could lure to the club is France-born Higuain, whose future in Turin looks distinctly uncertain.

“Would he come? I don’t know!” he admitted to L’Equipe du Soir. “He could be an important player for OM in the Champions League.

“It’s possible that he will leave Juve. He’s 32 and there is also a chance that a deal could be done as a loan.”

Even if the Argentina international was not lured by Ravanelli – and his wages would make any deal a long shot for a Marseille side that has been constructed on a comparatively small budget – the former Middlesbrough, Juventus and Lazio hitman believes he has the pulling power to help the club.

“I’m convinced I can sign players who will capture the imagination of the Velodrome,” he said. “Despite not having been a sporting director, I’ve got many contacts at very big clubs. And if OM has no money to sign players, why would Fabrizio, with loans, not be able to bring important players to Marseille?”

Meanwhile, Ravanelli is happy to let the club make the first move.

“I will not call Jacques-Henri Eyraud,” he said, referring to the club president. “I met him during the inauguration of the new Stade Velodrome. We spoke at the time.

Marseille finished second in the Ligue 1 standings in what was an aborted 2019-20 campaign due to the coronavirus pandemic, meaning that they will return to the Champions League next season for the first time in seven years.

Fri Jun 12 , 2020
The Nigeria and Cameroon internationals were on parade for Jose Bordalas’ men in their defeat at Estadio Nuevo Los Carmenes Oghenekaro Etebo and Allan Nyom featured prominently as Getafe lost 2-1 to Granada in Friday’s La Liga game. The Spanish top-flight became the second European league to restart after the Bundesliga, […] 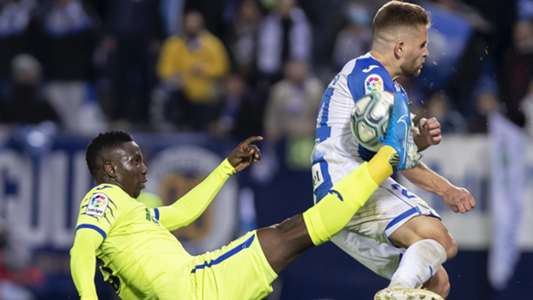