The Rangers midfielder opened up about the heated Europa League exchange, which is under UEFA investigation

Rangers midfielder Glen Kamara has given new perspective on his Europa League confrontation with Slavia Prague defender Ondrej Kudela last month, when he said Kudela called him a “f*cking monkey”.

Manager Steven Gerrard supported his player immediately after the March 18 knockout match, while the club filed a complaint to UEFA that remains under review. However, Kamara hadn’t discussed the moment until his sit-down with ITV on Wednesday. Kudela, meanwhile, has denied using racist language.

If he could go back, Kamara said, would have walked off the pitch. As it stands, he wants to help ensure football builds systems to prevent discrimination in the future.

Editors’ Picks
What has Kamara said?

“[Kudela] came over and said ‘you’re a monkey, you’re a f*cking monkey and you know you are,’” Kamara told ITV. “From there I reacted and said he’s racist, he’s racist.

“From there I had a lot of emotions going through my mind; angry, upset, I felt humiliated. All my family, friends, fans, whoever is watching, I felt like a little boy.

“I didn’t know how to feel to be honest, I was at a point where I was so angry I had tears in my eyes. I haven’t felt like that in God knows how long. It was a really weird feeling.

“For that to happen, from a so-called fellow professional, it’s crazy. It’s something you don’t expect in the game.

“Words can’t explain how I felt. Hopefully, I never have to feel that again. It was crazy really.”

Kamara said he appreciated Gerrard and the rest of the club backing him. His team-mates came to his support on the pitch in the immediate aftermath of the incident.

But the midfielder wishes he had walked off when the alleged racism occured.

“If I could go back to the game to the time of the game, I would have walked off the pitch, 100 per cent,” Kamara said. “The manager was trying to get me off the pitch but it was like I was on my own and I couldn’t hear anybody.

“I was just going through different emotions and I wasn’t listening.

“This type of thing shouldn’t be in the game. I don’t know if in our lifetime we’ll see it change. If I can make a change in some way, I’ll do it.”

What did Gerrard say after the match?

Gerrard brought up the moment in his post-match press conference, expressing disgust at what he believed had happened.

“I feel angry,” Gerrard told reporters. “It’s difficult to describe how I feel now because I know Glen and I trust him 100 per cent. It’s extremely disappointing.

“Glen Kamara to me is one of my own. I 100 per cent believe what he is saying in terms of the accusation.

“Other players around him heard it so I will stand toe to toe with Glen Kamara and I’ll deal with this however Glen wants to deal with it. I am proud of all my players showing solidarity and from the top of this club to the bottom we stand with the players.”

How did Slavia Prague respond?

The Czech club have denied the accusations of racism and said Kamara assaulted Kudela following the match, an allegation local police are currently investigating.

How did UEFA respond?

In a statement, UEFA wrote: “The CEDB [ethics and disciplinary body] today decided to provisionally suspend Mr Ondrej Kudela for the next UEFA club competition match for which he would otherwise be eligible.

“Further information about this case will be made available once the UEFA Control, Ethics and Disciplinary Body has taken a decision in due course.”

Wed Apr 7 , 2021
The Cameroon international found the back of the net for the sixth time this season for the Bavarians at Allianz Arena Eric Choupo-Moting was on the scoresheet as Bayern Munich lost 3-2 to Paris Saint-Germain in Wednesday’s Champions League first-leg quarter-final game. The forward was given an opportunity to lead […] 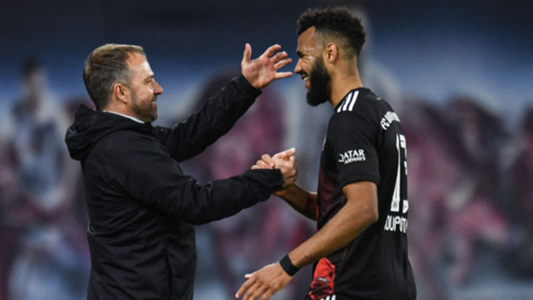