Sebastien Haller scored a goal and provided an assist as Ajax defeated FC Twente 3-1 in a Dutch Eredivisie match on Thursday.

The 26-year-old returned to the Netherlands last week to join the Sons of the Gods from West Ham United on a four-and-a-half-year contract.

After he made his Ajax debut in a 2-2 draw against PSV on Sunday, Haller returned to Erik ten Hag’s starting XI on Thursday and he got them off to a flying start with his eighth-minute opener, courtesy of an assist from Antony.

The Ivorian’s effort separated both teams for the majority of the encounter until Julio Pleguezuelo grabbed the equaliser for FC Twente in the 84th minute.

Six minutes later, Haller assisted Klaas-Jan Huntelaar to produce some super-substitute moments after he was introduced in the 89th minute.

Huntelaar restore Ajax’s lead on the stroke of full-time and the Dutch forward added another goal in the stoppage-time, after benefitting an assist from Morocco’s Zakaria Labyad, to seal maximum points for the visitors at De Grolsch Veste.

Nigeria right-back Tyronne Ebuehi was also on parade for FC Twente as he made his 16th league appearance this campaign.

Thursday’s triumph extended Ajax’s dominance at the summit of the Eredivisie table to 38 points after 16 games while FC Twente are seventh in the table with 27 points.

Next up for Haller and Labyad’s Ajax is a league match against second-placed Feyenoord at the Johan Cruyff Arena on Sunday.

Thu Jan 14 , 2021
But for Zinedine Zidane, the chance for early silverware in 2021 slips through his hands. His side will be left to rue their errors; indeed, they’ve mustered just one goal in 180-plus minutes against arguably inferior opposition now. There’s questions to be asked. Indeed, it will be a rematch of […] 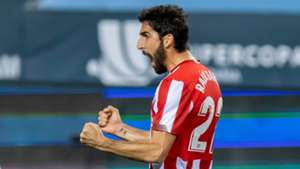