Before the encounter, Logrono were smarting from three-straight defeats in all competitions, celebrating only just three victories so far this season.

After a 2-0 defeat at Madrid CFF, Jose Moncayo’s side handed Cote d’Ivoire duo Guehai and Elloh along with Asanteewa, starting places against Vallecano, who are also without a win in three.

Logrono made an unfortunate start to the contest at Estadio Nuevo Municipal Las Gaunas when Pilar Garcia gave Rayo Vallecano a shock lead, with just 21 minutes of action in the encounter.

The hosts, however, started the fightback on a high when the Ivorian internationals Guehai and Elloh combined well for the latter to secure the equaliser a minute after the restart.

Six minutes later, Asantewaa announced her return to Logrono’s fold in style when she netted the second of the match and completing her side’s comeback to earn their third win of the season.

The result takes Logrono to 14th position on the Spanish Primera Iberdrola log, with 13 points from 15 matches this season.

Ghana’s Asanteewa played from the start to the finish to earn her third goal, while Cote d’Ivoire duo of Elloh, who got her first goal and Guehai featured for 78 and 85 minutes respectively.

Bounced back in style… Got the second goal to seal victory for @edflogronofem .. 💪🏾💪🏾💪🏾#AsantewaaMessiah ⚽️ 🇬🇭 | #backtowork pic.twitter.com/PhLi8ijr1D

In their next fixture, the African stars will hope to help their side maintain their winning form at Espanyol on January 31.

Wed Jan 27 , 2021
The Blues have now gone 32 games without losing, breaking a mark previously held by Manchester City Chelsea have set a new Women’s Super League record by defeating Aston Villa 4-0 on Wednesday, with the Blues now having gone 32 matches without a loss.  Emma Hayes’ side have surpassed the […] 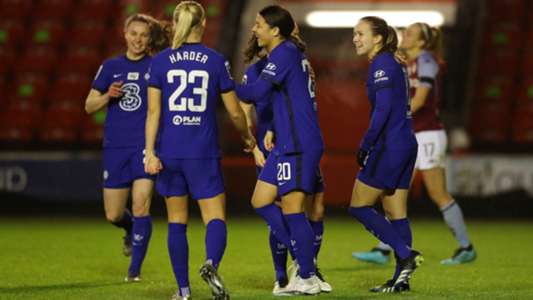