The Premier League leaders have conceded nine goals fewer than any other team, with their marquee summer signing having a huge impact

Pep Guardiola has explained the reasons behind Manchester City’s excellent defensive record this season and hailed Ruben Dias’s impact on his team-mates.

With just 13 goals conceded in 21 games, City have by far the best record in the Premier League so far this season. Arsenal and Tottenham are the next best with 22 goals conceded.

It is a marked improvement from last season, when City’s porous defence contributed to their surrendering of the league title to Liverpool.

Dias, brought in from Benfica in a £62 million ($79m) deal over the summer, has drawn comparisons to Virgil van Dijk for his transformative effect on City’s defence, and Guardiola believes it is his communication and reading of the game which have proved his biggest attributes.

“Basically, he talks to them during the game,” Guardiola told Sky Sports. “He anticipates. He does not play the game for himself; he looks what happens in front of him and behind him.”

Despite City’s excellence at the back, Guardiola says his team’s good record at the back is down to improvements all over the pitch.

City struggled to maintain their best form last year but, after grinding out wins at the start of this season, they now look close to their imperious best.

Even with star men Kevin De Bruyne and Sergio Aguero out of the team, City have won a club-record 13 consecutive games in all competitions, conceding just three goals.

“The reason why [our defensive record is so good] is because 67 per cent of the time we have the ball,” Guardiola explained.

“Of course, the opponent can score from set pieces or a counter-attack but the more that you have the ball the more chances you will have to score a goal. This is the reason why.

“Maybe one day they will change the rules but I think to score a goal you need the ball.

“You cannot win titles, especially the Premier League and the Bundesliga, if you concede a lot of goals. Last season we conceded more than usual and we didn’t adjust well to some things. But if you look at the goals that we conceded in all of our years here in Manchester, in Munich, in Barcelona, it was always few. Few, few, few.

“And we did it playing 50 or 60 metres in front of our goal, and always we were stable defensively. Absolutely, I do not want to concede goals. And I want to score a lot. That is what we are working for with good quality players who want to have the ball.”

Sat Feb 6 , 2021
The Reds have been blighted by injuries this season, leaving Jordan Henderson to fill in at centre-back Source of the article 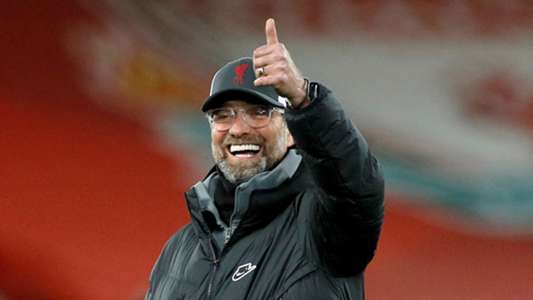