Pep Guardiola has confirmed that Eric Garcia is conscious after his injury in Manchester City’s win over Arsenal.

City returned to action with a convincing 3-0 win over Arsenal. However, there was a worrying moment when centre-back Garcia was on the receiving end of an unintended collision from his own keeper, Ederson.

Play had to be halted for a significant amount of time, before Garcia was stretchered off.

Guardiola relayed the news of his condition after the game, telling Sky Sports that Garcia is conscious.

“We are really concerned,” Guardiola said. “He responded quite well but we have to wait. He is conscious which is a good sign. We will make another test.”

In terms of the overall performance, the Man City boss was pleased with the energy shown by his side.

“In the beginning it was a lot of energy,” he added. “Everybody wanted the ball. It was not quiet.

“We had chances. It was important to score before half time.

“I am happy with the performance of the team. I see in a good shape, the team, which is a good thing for the next few games.

“We have one eye on the next game. Aymeric Laporte was out for a long injury. We have players who play 50, 60 minutes which is good. And can maybe play the next one good.” 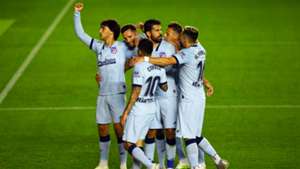