Granada defensive midfielder Ramon Azeez has expressed his delight with the restart of La Liga and is keen to play again.

The Spanish top-flight has been put on hold since mid-March owing to the coronavirus outbreak which is still wreaking havoc around the world.

The league will, however, resume on June 11 as safety measures have been put in place with games set to be played behind closed doors, thus, becoming the second European top-flight to resume after the Bundesliga.

Granada are ninth on the league table with 38 points from 27 games and will take on fifth-placed Getafe, who will be expected to parade Nigeria’s Oghenekaro Etebo on Friday.

Azeez has been a consistent performer for Diego Martínez’s men in this campaign and he is eager to get back to action to continue from where he stopped before the outbreak of Covid-19.

“I’m so glad to be back on the pitch again and I can’t wait. It has been weeks of uncertainties due to the lockdown and the virus’s continuous spread but I am glad we are back at it,” Azeez told AOI .

Azeez has spent the majority of his professional career in Spain, joining Almeria in 2011 and went on to spend six years with the side.

In the summer of 2017, the midfielder moved to Lugo before teaming up with Granada last year and helped the Nazaries secure promotion to La Liga.

The Super Eagles player has made 21 appearances across all competitions for the Nuevo Los Carmenes outfit in this campaign and feels the Spanish top-flight is one of the best leagues in the world.

“Football in Spain is top notch and of high quality. If one can successfully play in La Liga, I think it will be safe to say you can play anywhere else in the world,” he added.

Azeez’ impressive performances for Granada recently earned him a recall to the Super Eagles, after he was shut out of the team for five years.

The midfielder has six caps for Nigeria and was part of the invited players to take on Sierra Leone in an Africa Cup of Nations qualifying game before its suspension due to the Covid-19 pandemic.

Azeez will hope to continue his consistent showings for his club as they aim to secure a place in Europe next season.

Thu Jun 11 , 2020
LaLiga They lead the scorers’ table Roger (left) and Parejo (right). SanzMARCA As many as 27 games have been disputed between Valencia and Levante with Dani Parejo and Roger Marti topping the table of the derby’s top scorers The first match between the two clubs took place back in 1963 and […] 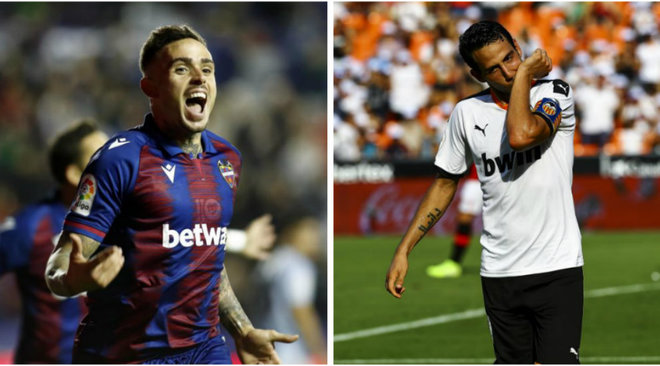