Allan Nyom has revealed Getafe is aiming to clinch victories against Granada and Espanyol when they meet in La Liga.

The Spanish top-flight has been suspended since mid-March following the outbreak of coronavirus in Spain and across the world.

The league, is, however, set to resume on June 11 behind closed doors after safety measures have been put in place having secured the government’s approval.

Getafe will take on Granada on Friday at Estadio Nuevo Los Carmenes in their opening game after the restart of the league before facing Espanyol four days later at Coliseum Alfonso Perez.

Jose Bordalas’ men are currently fifth on the league table with 46 points from 27 games, having won 13 matches, drawn seven and lost seven.

The Cameroon international explained his side is looking to build on their performances before the league was forced into a hiatus.

“We expect a Granada that competes very well. It will be a difficult match. They want to win, but like us, we also want to win and start again with three points,” Nyom told the club website.

“Our goal is to beat Granada, then Espanyol and keep adding. We work very hard every day, but you have to have your feet on the ground to achieve your goals.”

The 32-year-old defender has been key to his side’s success in this campaign, having featured in 25 league games.

The French-born Cameroonian started his career with AS Choisy-le-Roi youth setup before joining the Nancy academy.

He moved to Arles-Avignon and made 37 appearances for the side and then left for Udinese, who immediately loaned him to Granada.

He spent six years on loan at Nuevo Los Carmenes and made 204 league appearances to help them secure promotion to the Spanish top-flight before departing to Watford in 2015.

Nyom, who has 18 caps for Cameroon, will hope to continue his consistent form for Getafe in this campaign.

Thu Jun 11 , 2020
80′ POOR! Betis’ best spell in the game has come since falling two goals behind, perhaps knowing that they have nothing to lose. The ball is cut back for Emerson to strike goalwards, but he drags his first-time shot wide from a good position. 78′ Substitution Alejandro Moreno Lopera Alfonso […] 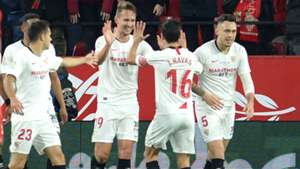