Napoli center-back Kalidou Koulibaly has narrated how coach Gennaro Gattuso has given the players “a lot of self-confidence” in the wake of their 2-1 aggregate victory over Inter Milan in the Coppa Italia semi-finals on Saturday.

The Partenopei led 1-0 from the first leg back in February, but the Nerazzurri levelled the tie very early thanks to Christian Eriksen.

Dries Mertens’ equaliser four minutes prior to the half-time break was, however, enough for Napoli to reach their first cup final since 2014 when they saw off Fiorentina 3-1.

Prior to the suspension of Serie A, Napoli recorded five wins in six league games, with a shock home defeat to Lecce the only blemish.

It has put the Campania outfit back in the European places, a position they were distant from before Gattuso’s arrival.

“We knew it would be very difficult as a match, Inter came here to put us in difficulty and it is seen from the first goal,” Koulibaly told Rai Sports.

“We responded well, with a good goal, and we were solid. We have been missing this last aspect for some time.

“[Gattuso has given] a lot of self-confidence. We had lost self-esteem, he gave it back to us. Tactically he gave us a little more, he taught us to suffer.

“In the first months of this championship we could not suffer, we were in difficulty. Now instead we can do it. We are on the right track, we need continuity.”

Koulibaly had been out of action since December with a muscle injury and he insisted Napoli need to do more when they face Juventus – who saw off AC Milan via away goals in the other semi, in the final.

The Senegal international was also appreciative of those that have helped in his recovery back to fitness.

“The things we did before are coming back. A little more work is needed, we can do even better,” Koulibaly continued.

“Everyone is in the project and that is very important. We want to offer something to our fans, we have to prepare the final to the best, calmly and serenely.

“I haven’t played for six months, I’m happy to have helped my friends who in this period have given me a lot, just like the fans.”

Sun Jun 14 , 2020
The fan, identified as a French national living in Mallorca, is considered to have committed a ‘criminal act’ by the governing body La Liga has promised to take legal action against a pitch-invading fan who sought a photo with Lionel Messi during Saturday’s clash between Mallorca and Barcelona.  The game, […] 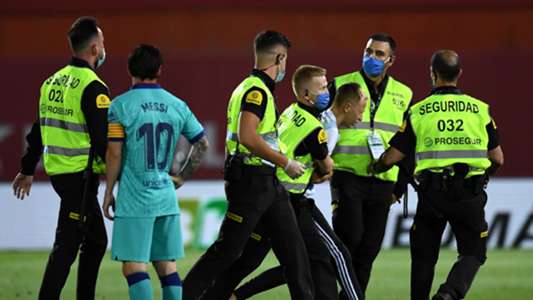