Kaizer Chiefs head coach Gavin Hunt has revealed that Itumeleng Khune has been stripped of the club’s captaincy.

Eyebrows were raised when experienced goalkeeper made his return to the Amakhosi starting line-up against AmaZulu FC while not wearing the captain’s armband on Wednesday.

Ramahlwe Mphahlele, who was also returning to the starting line-up after recovering from an injury, led Chiefs as they suffered a 2-1 defeat to AmaZulu in a PSL match at FNB Stadium in Johannesburg.

Samir Nurkovic has captained the Soweto giants in the absence of both Khune and Mphahlele this season.

Hunt has stated that Mphahlele is the new Chiefs captain with Khune having struggled for game time this term as he serves as the club’s second-choice goalkeeper behind Daniel Akpeyi.

“Ramahlwe is the captain now,” Hunt was quoted as saying on Daily Sun on Wednesday.

“Khune has been out for a long time. But Rama is the captain now.”

Khune, who was replaced as Bafana Bafana captain by Thulani Hlatshwayo in 2017, was beaten by two strikes from AmaZulu attackers Augustine Mulenga and Lehlohonolo Majoro.

The former South Africa under-23 international was to blame for the second goal as he failed to punch the ball away from danger and he was punished by his former Chiefs teammate, Majoro.

Khune has endured one of his worst seasons since he has promoted to the Amakhosi first team from the club’s academy in 2004.

The man nicknamed Itu has now conceded 12 league goals in six matches this season following the narrow defeat to AmaZulu.

Itu made two similar costly mistakes in back-to-back PSL matches against Black Leopards and SuperSport United in December 2020 and he lost his place in the starting line-up to Akpeyi.

This is the third time that Khune has been stripped of the armband with Tefu Mashamaite having replaced him as Chiefs captain during the 2014/15 season with Stuart Baxter in charge of the team.

Khune also lost the armband to Siphiwe Tshabalala during the 2015/16 campaign and this time the team was under the guidance of Steve Komphela.

Itu was reappointed Chiefs captain by Komphela ahead of the 2016/17 PSL season and he has now been replaced by Mphahlele, who is a former Mamelodi Sundowns skipper.

Thu Feb 18 , 2021
Simba 1-0 Biashara United: League champions win to put pressure on Yanga SC Wekundu wa Msimbazi are playing catch-up games as they attempt to narrow the gap between them and Timu ya Wannachi Tanzanian giants Simba SC picked a 1-0 win over Biashara United in a Mainland Premier League tie […] 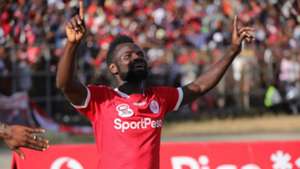