Ole Gunnar Solskjaer has backed Anthony Martial to turn around his form after the striker failed to make an impact in Sunday’s 1-1 draw at West Brom.

Martial started but was withdrawn after 66 minutes, with Mason Greenwood replacing the France international.

United were unable to defeat the relegation-threatened Baggies as they slipped to seven points behind table-topping Manchester City, who have a game in hand over Solskjaer’s side.

Asked in his post-game press conference if he was concerned about the forward’s form, Solskjaer replied: “Oh no, I know Anthony is working hard to get back to where he was.

“His attitude is very good. Form is sometimes temporary but class is permanent and the kid has got class.”

The 25-year-old has managed three goals in 12 appearances for United in 2021, with two of those coming late on in a 9-0 hammering of Southampton earlier this month.

Overall, Martial has seven goals in 29 appearances this season for the Red Devils, falling short of the pace he set last term when he netted 23 times in total.

Though he has not yet hit the heights of 2019-20, Martial has still started seven of United’s past nine games in the Premier League.

Despite Martial falling short of his form from last season, United still lead the Premier League in goals scored.

Marcus Rashford and Bruno Fernandes have been prolific, while Edinson Cavani has also chipped in with important goals for the Red Devils.

Defensively, though, United have faltered, with only Liverpool having conceded more goals in the Premier League’s top 10 than Solskjaer’s side.

Sun Feb 14 , 2021
The Gunners skipper was in superb form at the Emirates Stadium as his side took on Marcelo Bielsa’s Leeds Pierre-Emerick Aubameyang notched up another major career milestone when he scored his first Premier League hat-trick in Arsenal’s game against Leeds United. The Gunners captain cut in off the left flank to […] 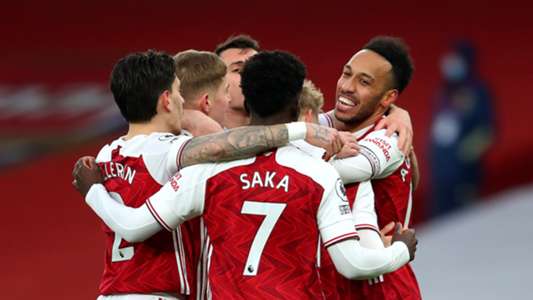