Inter were taken to extra time by Fiorentina but again knocked the Viola out of the Coppa Italia thanks to Romelu Lukaku’s header.

Substitute Romelu Lukaku rescued Inter with a 119th-minute winner to knock Fiorentina out of the Coppa Italia with a 2-1 win for the second season running.

Lukaku started from the bench ahead of Sunday’s Derby d’Italia against Juventus but was called for in the second half after Christian Kouame had cancelled out Arturo Vidal’s penalty opener.

There was no immediate impact as the Nerazzurri sought to get their season back on track, having taken just a point from their prior two Serie A matches.

Yet Lukaku made his mark deep into extra time at the Artemio Franchi, powering a header past Pietro Terracciano to book Inter’s place in the quarter-finals.

This was a tame affair until a frantic finish to the first half when Christian Eriksen’s shot was spilled by Terracciano, who felled Alexis Sanchez as the follow-up squirmed beyond the goalkeeper and against the post.

A spot-kick was awarded only after referee Davide Massa consulted the pitchside monitor, but Vidal took full advantage.

Massa was swiftly called to the screen again to correct a second errant call, this time initially giving a foul against Milan Skriniar for a well-timed tackle on Kouame inside the area.

There was no reprieve for Inter when Kouame controlled a poor clearance and lashed into the top-right corner three minutes before the hour, however.

Lautaro Martinez had remarkably blasted wide prior to that strike and Sanchez was the next visiting star to pass up a big opportunity as he failed to turn in Ivan Perisic’s cross.

Routine saves at either end took the match to extra time, where another Perisic centre deflected onto the crossbar and Sanchez was again wasteful in nodding straight at Terracciano.

Fiorentina looked to have reached a shoot-out when Terracciano blocked from Lukaku, but the striker decisively made amends with a second header to settle the tie.

Wed Jan 13 , 2021
The Gunners duo have formed a close bond, which is showcased in a new documentary charting the Spain full-back’s return from a serious knee injury Kieran Tierney has revealed the impact Hector Bellerin has had on his short Arsenal career so far, saying he would never have been able to […] 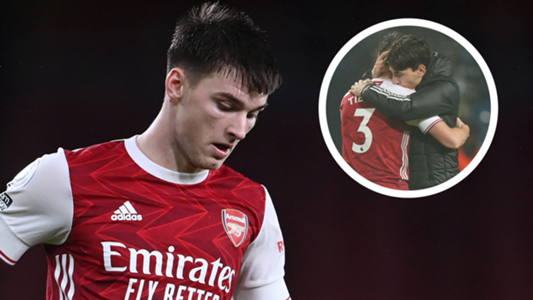