Former Ghana U17 attacker Eric Ayiah believes he made the best choice in joining French Ligue 1 outfit Monaco despite struggling to break through the club’s youth system.

The striker made headlines in 2017 in leading Ghana to the Africa U17 Cup of Nations in Gabon and the Fifa U17 World Cup in India.

Shortly after the tournament, he was snapped up by the French side, who secured his services from Ghanaian fold Charity Stars in a five-year contract.

“Our facilities here [Ghana] are not up to what they have in France,” Ayiah told Original FM .

“I think it is a better place to start from if only you have the aim to play football and also, the academy that I have played for about two and a half years now has helped me to learn a lot.

“If I watch some of my past videos, I can see there is a lot of improvement in many aspects of my game.

“I don’t regret the decision to move to Monaco. Joining Monaco has really helped me in terms of their facilities and what we have here in Ghana.”

At the U17 Afcon four years ago, Ayiah netted four times to finish second top scorer at the tournament.

Five months later in India, he scored three times to propel the Black Starlets to the quarter-final of the World Cup.

“It is an honor to play for As Monaco, life has been great there despite injuries, I’m so happy as a player” Ayiah told Wontumi FM last year.

“It is an honor to play for AS Monaco because of their past history, in fact I am loving life at Monaco.”

Ayiah was one time likened to PSG and France striker Kylian Mbappe who developed through the Monaco youth system to the senior team before moving to Les Parisiens in 2017.

“We [Charity Stars] believe the club is the best destination for his development. We’ve seen what the club has done with unearthing big players like Kylian Mbappe and believe moving to France with Monaco will help him,” Charity Stars Charity chief executive officer Samuel Owusu Amoah said after the player’s move to Monaco in 2017.

Ayiah is yet to make a senior debut at Monaco. 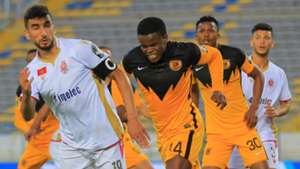