Former Chelsea, Inter, Parma and Argentina star Hernan Crespo celebrated his first title as a coach on Saturday as he led Defensa y Justicia to victory in the Copa Sudamericana.

The Florencio Varela, Buenos Aires outfit lined up against Lanus in the final in Cordoba in an all-Argentine decider.

And they drew first blood in the Estadio Mario Kempes when centre-back Adonis Arias polished off a fine collective move from the edge of the area.

Sudamericana top scorer Braian Romero subsequently doubled Defensa’s advantage in the second half when he took advantage of an error at the back from Lanus to net his 10th of the competition and effectively put the final out of reach.

Lanus pushed hard for a way back, but they failed to breach the Halcon’s lines and Crespo’s charges added another in the final minutes through substitute Washington Camacho for a 3-0 victory.

As well as marking the ex-striker’s maiden crown, it is also the first title in Defensa y Justicia’s 85-year history.

Crespo took over in Florencio Varela at the start of 2020 after a previous spell at fellow south Buenos Aires side Banfield.

His first year in charge saw Defensa compete for the first time in the Copa Libertadores, a campaign that was interrupted for more than six months by the coronavirus pandemic.

When the Libertadores finally resumed in September the Argentines missed out on qualification for the knock-out rounds, but secured third place in their group and passage to the secondary Sudamericana.

There they disposed of Brazilian duo Vasco and Bahia as well as Paraguay’s Sportivo Luqueno to reach the semi-final against Coquimbo, a tie which was initially delayed due to two false positive Covid tests among the Defensa squad ahead of the first leg.

Coquimbo were subsequently dispatched 4-2 on aggregate to set up Saturday’s final against Lanus, who had overcome Buenos Aires rivals Velez Sarsfield to progress from the last four.

While Crespo was overjoyed with victory amid sweltering conditions in Cordoba, his future at Defensa remains unclear.

Three of Argentina’s traditional ‘Grandes’ (big clubs), Racing Club, San Lorenzo and Independiente, had shown interest in the ex-Argentina international’s services, only to look elsewhere in January when it became clear he would not consider a move away until the end of the Sudamericana.

“I am living in Defensa day-to-day,” he stated to TyC Sports in January.

“I intend to go to a big South American side or look for a European opportunity, I’m not going to hold out for a Real Madrid.”

Sat Jan 23 , 2021
Tanzania 1-0 Namibia: Taifa Stars eliminate Brave Warriors from Chan The East Africans are now on three points and need a win in their final game against Guinea to advance Tanzania defeated Namibia 1-0 in their Group D African Nations Championship match played at the Omnisport Stadium in Limbe on Saturday night. […] 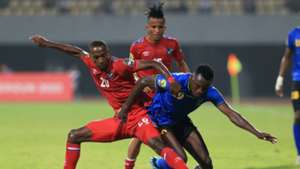