Shola Shoretire says he’s aiming to emulate Manchester United’s homegrown stars such as Marcus Rashford and Mason Greenwood after making his “dream” debut for the club on Sunday.

After naming Shoretire on the bench for the first time during a Europa League clash with Real Sociedad last Thursday, Ole Gunnar Solskjaer decided to hand the teenager his first senior appearance against the Magpies.

The English forward came on as a late substitute during the 3-1 win at Old Trafford, and he has now set his sights on securing a regular place in the team.

Shoretire told MUTV: “I was nervous but I worked really hard to get here for this moment so I just wanted to do the best I could.

“Looking at people like Marcus and Mason, they’ve come through the same thing I have, through the academy, it shows the coaches are doing a really good job.

“It’s also nice to have Nicky Butt and Mark Dempsey on the bench because I’ve been with them with the Under-23s, they’ve been helping me out, it’s good to share that moment with them.

“When I travelled to Turin for Real Sociedad I was thinking I might get on because we’re winning, obviously I could’ve been disappointed after that game but I thought I’m just going to work hard in training again.

“I can learn from them [Rashford and Greenwood]. Everyone in the academy idolises Mason and Rashford because they’ve gone on the path we all want to follow, so it’s great to share a dressing room with them.”

Where does Shoretire rank among United’s youngest debutants?

Shoretire became the seventh youngest debutant in United’s history when he made his brief cameo against Newcastle at 17 years and 20 days old.

Norman Whiteside, Willie Anderson, Angel Gomes, Duncan Edwards and Jeff Whitefoot were all younger when they made their bows for the Red Devils, but David Gaskell still holds the record after lining up at the age of 16 years and 19 days in the 1956 Charity Shield.

Shoretire added: “It feels great. It is such a proud moment for me and my family. I’ve worked so hard to get here and my mum and my dad. I have been at the club since I was 10 and it is a dream come true to be playing for the biggest club in the world.

“With the fans, it makes it 10 times better but still to come on at Old Trafford, looking around me at the size of the stadium and looking where I would sit as a fan and finally playing on the pitch, it was a great moment.”

What’s next for Shoretire?

Shoretire could be in line to make his first start for United when they take on Real Sociedad in the second leg of their round-of-32 Europa League tie on Thursday.

The Red Devils won the first leg 4-0 at the Allianz Stadium in Turin, which gives Solskjaer the opportunity to ring the changes for the return fixture at Old Trafford.

Mon Feb 22 , 2021
The John Abraham-owned side are involced in a hotly-contested playoff race… NorthEast United need to beat East Bengal on Tuesday to keep their playoff hopes alive in the 2020-21 Indian Super League (ISL). The Highlanders, currently fifth with 27 points from 18 games, dropped points against Chennaiyin FC in the 3-3 draw […] 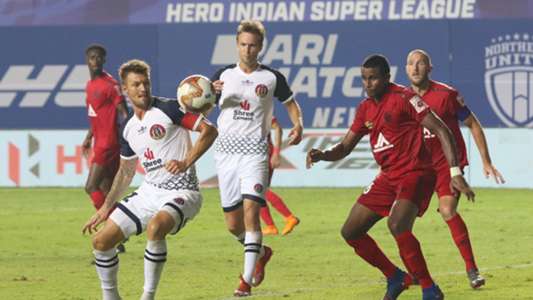