The 49-year-old tactician also felt that his side conceded cheap goals against Stellies, who scored their first goal after Rivaldo Coetzee’s mistake

Mamelodi Sundowns head coach Manqoba Mngqithi was a relieved man after his side secured a hard-fought win over Stellenbosch FC on Wednesday evening.

The Brazilians claimed a 3-2 extra-time victory over Stellies in the Nedbank Cup Last 32 game which was played at Loftus Versfeld Stadium in Pretoria.

Sundowns looked destined to win 2-1 after Gaston Sirino scored in the first minute of stoppage time, but Stellenbosch grabbed a late equalising goal through Phathutshedzo Nange.

“It’s one of those games we knew was going to be very difficult. We anticipated they would defend with a very low block and when they do that it demands a lot on us,” Mngqithi told SuperSport TV.

“At times I thought we were moving the ball a little bit slow which did not help us to find the openings quicker. We kept demanding that. Which is why we brought on players that could play between the lines and also Thapelo [Morena] to offer us more width and speed on the side.

“To be honest, we knew it wasn’t going to be an easy game. It was always going to be scrappy. But I think it was good for the viewers at home because a game with five goals is always entertaining but if you look at the goals we conceded they were very cheap goals.”

“Ja, we anticipated that [Ashley] Du Preez would be a problem. I saw from the beginning of the match that he immediately occupied a position on one side of our central defence and I said ‘here we go’ because I knew they were looking for that space behind the defence,” he continued.

“Fortunately we dealt with those situations, but we gave away a very silly goal. But nobody will say we were not aware that Du Preez would cause problems in behind our defence, Skelem as well. Stanley [Dimgba] the Nigerian gives a very good account of himself behind the defence.

“I commend the hard work and the shift the boys put in. But we are still not assured enough in front of goal.”

Why does it matter & what’s the bigger picture? The win saw defending champions Sundowns advance to the Nedbank Cup Round of 16, joining former PSL club Polokwane City, who are now campaigning in the National First Division. Masandawana are looking to become the first team to successfully defend the Nedbank Cup since their Tshwane rivals SuperSport United won back-to-back trophies between 2016 and 2017.  Sundowns’ hopes of winning another treble are alive as they are also competing in the PSL and Caf Champions League, having clinched three trophies last season.  The Brazilians are set to take on Sudanese giants Al Hilal Omdurman in their first Champions League Group game at home on February 13.  Further reading

Wed Feb 3 , 2021
The Porcupine Warriors have added three more points to their haul after a slim win over the Eleven-Is-To-One  A Naby Laye Keita penalty secured Asante a 1-0 victory over Inter Allies in the Ghana Premier League on Wednesday. The Guinean’s 68th-minute effort, after Kwame Opoku was fouled in the box, […] 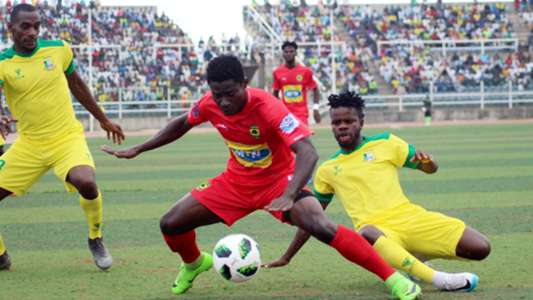