Simba SC defender Erasto Nyoni has assured club fans they have already moved on after the shock 1-1 draw against Ruvu Shooting in a Mainland Premier League match on Sunday.

The Mainland giants had been tipped to collect maximum points in the fixture but it was not the case as they secured a draw, which delayed their pursuit for a third straight league title.

The Taifa Stars player has now told fans they have moved on from the result, focusing on their next challenge when they face Mwadui FC on Saturday.

“I want to assure our fans we are not looking at the Ruvu result again, we have forgotten about it and moved on, it was a shocking result and we know our fans were hurt but we don’t want to do that again, we want to win our next match,” Nyoni told the club’s official website.

“Our fans should not lose hope, they should come in numbers and cheer us against Mwadui, we promise it will not be the same again, we will do our best to make sure they smile back home.

“All our players are in good shape, we don’t have any injuries and in football, you either win, lose or draw, it was a painful draw because we did all we could but Ruvu were also good, we must now shift our focus to the Mwadui, it is a must-win match and we will make sure we win it.”

On whether the draw affected their title pursuit, Nyoni said: “We have our own calculations as far as the title is concerned, we don’t want to hear what people are saying, we know exactly what we are supposed to do to win the trophy and we will continue to fight to achieve the same.”

Erasto, who plays at the backline alongside Pascal Wawa, Kennedy Juma, Tairone Do Santos and Yusuph Mlipili, also dismissed claims his recent form had dipped insisting only the coach can tell him that.

“I play the way the coach wants me to play, and I don’t want to listen to the critics, they have their own opinion but mine is not to answer them through media, mine is to make sure I answer them on the pitch with solid performances.”

Simba are topping the log on 71 points, while Azam FC are second on 54 points and Yanga remains third after accumulating 51 points.

Man Utd, Liverpool all ears as Gattuso admits Napoli stars may be sold

Thu Jun 18 , 2020
Date published: Thursday 18th June 2020 11:55 The likes of Manchester United and Liverpool will be on alert after Napoli boss Gennaro Gattuso admitted some of his players will leave this summer. Gattuso has admitted that he only expects to retain the services of 70-80 per cent in the upcoming transfer […] 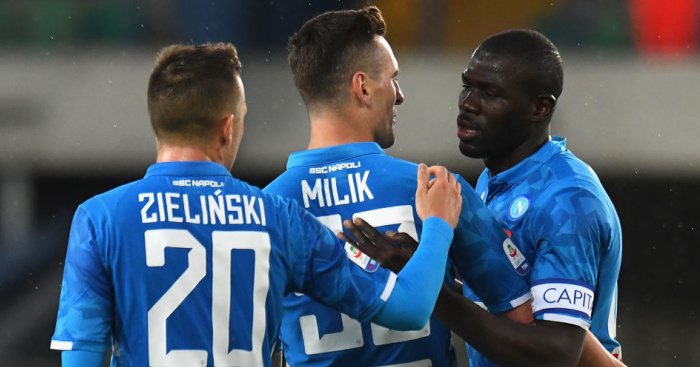