Africans in the English second-tier suffered contrasting fortunes on Saturday, with the Senegal international shining like a million stars

Having played a 0-0 draw against Coventry City their last time out, the Hornets hit the visitors for six with the Senegal international beating goalkeeper Daniel Bentley on two occasions while providing two assists also.

Xisco Munoz’s men got off to a flying start at Vicarage Road with Taylor Moore turning the ball into his own net.

In the 15th minute, Sarr doubled the lead before Will Hughes got the third goal in the 30th minute while Ken Sema made it four for the hosts in a goal-laden first half.

The Hornets continued their dominant display in the second-half with Sarr completing his brace in the 55th minute, while substitute Philip Zinckernagel wrapped up the game in the 90th minute.

Alongside Nigeria international William Troost-Ekong, Sarr was in action from the start to finish while Morocco’s Achraf Lazaar was introduced for Kiko in the 77th minute.

At the Madejski Stadium, Guinea Bissau’s Alfa Semedo scored Reading’s only goal as they stuttered to a 2-1 defeat at home to Millwall.

Semedo, who is on loan from Benfica had given the hosts a 17th minute lead after getting the better of goalkeeper Bartosz Bialkowski.

Nevertheless, the visitors came out stronger in the second half to secure all points at stake thanks to goals from Matt Smith and Mason Bennett.

Despite the setback, Reading occupy fifth spot on the log after accruing 48 points from 29 outings.

Elsewhere, John Obi Mikel was cautioned as Stoke City were brought down 4-1 by Norwich City.

The former Chelsea star went into the bad books of referee Jeremy Simpson in the 43rd minute following a poor tackle and his team went on losing to the hosts who relied on a brace from Teemu Pukki plus strikes from Todd Cantwell and Argentina midfielder Emiliano Buendia.

Mikel was taken off in the 62nd minute for James McClean while Cameroonian goalkeeper Blondy Nna Noukeu was not listed for action by manager Michael O’Neill.

In another Championship showdown, former Belgium youth international Isaac Mbenza of Congolese background scored his fourth goal of the season for Huddersfield Town, yet his team lost 3-2 at Wycombe Wanderers.

Juninho Bacuna had given the Terriers an early lead before Mbenza doubled the advantage four minutes before the half-time break.

Yet, they ended up on the losing side as the visitors were propelled by strikes from Anis Mehmeti, Joe Jacobson and Josh Knight.

DR Congo international Neeskens Kebano scored his first goal for Middlesbrough as they stuttered to a 2-1 defeat at Derby County.

The midfielder joined Boro on loan from Fulham and after a below-par performance in his maiden game for Brentford, he showed his quality at the Pride Park Stadium.

Wayne Rooney’s men took the lead through Lee Gregory in the 15th minute before they raced to a two-goal advantage in the 32nd minute with Colin Kazim-Richards getting past goalkeeper Marcus Bettinelli.

Seven minutes before the half-time break, Kebano pulled one back for Neil Warnock but that could not prevent them from crumbling against the Rams.

With Boro’s defeat, they dropped to eighth after garnering 40 points from 29 outings so far in the 2020-21 campaign.

Sat Feb 13 , 2021
The German midfielder starred for the Blues against Jose Mourinho’s men, but was unable to see the game out and had to be replaced In-form Ilkay Gundogan added another two goals to his impressive tally in Manchester City’s Premier League clash with Tottenham, but he was unable to see the […] 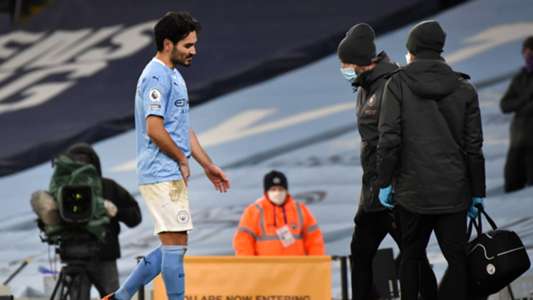