Youssef El-Arabi found the back of the net as Olympiacos secured a 4-2 victory over PSV Eindhoven in the first leg round of 32 of the Europa League game on Thursday night.

The 34-year-old is not looking to slow down despite his age and has continued to deliver terrific performances for the Legend.

The centre-forward was handed his 28th appearance across all competitions and utilized the opportunity to score his 19th goal of the campaign.

Olympiacos started the game on an impressive note when Andreas Bouchalakis opened the scoring only nine minutes into the encounter after he was set up by Mathieu Valbuena.

PSV levelled proceedings five minutes later through Eran Zahavi and in the 37th minute, Yann M’Vila put Olympiacos back in front with a fine strike.

Zahavi again levelled matters for the Red and whites three minutes later and moments before the half-time break, El-Arabi scored.

After the restart, Olympiacos continued to dominate proceedings and deservedly got their fourth goal through Giorgos Masouras which sealed the victory.

El-Arabi featured for 74 minutes before making way for Kostas Fortounis while his teammate and Guinea international Mady Camara was on parade for the duration of the game along with Senegal defender Ousseynou Ba.

The Morocco international has been with the Karaiskakis Stadium outfit since the summer of 2019 when he teamed up with the Greek side after leaving Al-Duhail.

The forward has been a consistent member of the Legend team, having featured in more than 60 games for the club, scoring a number of breath-taking goals.

El-Arabi will be expected to continue his impressive form in front of goal in the return leg but before that, he will hope to help his side continue their winning run when they take on Aris in a league game on February 21.

The 34-year-old has featured 34 times for the Morocco national team since he made his debut against the Central African Republic.

Thu Feb 18 , 2021
The Super Eagles midfielder started the party at the Bosuilstadion with his opening strike before the Gers completed a thrilling comeback Joe Aribo opened his goal account in the Uefa Europa League this season with the opening goal in Rangers’ 4-3 comeback win over Royal Antwerp on Thursday. Aribo broke […] 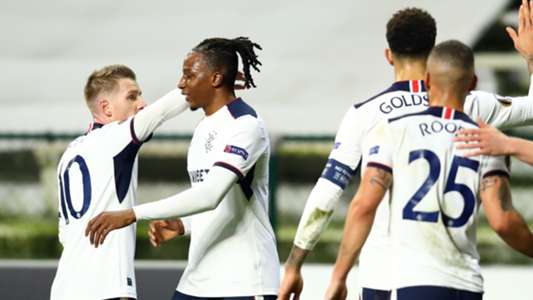