East Bengal assistant coach Tony Grant was unhappy with the second goal conceded by his team in their 1-3 loss against ATK Mohun Bagan in the ISL 2020-21 clash at the Fatorda Stadium on Friday.

Grant said the match could have gone either way when both teams were tied at 1-1. He, however, mentioned that the second goal scored by the Mariners was the turning point of the match and his team gifted them the goal.

“I thought it was a good derby game. It was an honest game. Strong game. Obviously, the sloppy goal that we gave away, the second goal was the turning point. It is a derby game, it’s a (goal) each and we gifted them the second goal,” Grant said after the game.

“In the derby game, the opposition did not do too much to win the game. We helped them. Both teams cancelled each other out. It wasn’t great football played by both the teams. They have a ball over the top that’s their gameplan. It was a big game. The second goal was the turning point. Of course. At 1-1, we had bright runs. We gifted them the goal. At 1-1 It was very hard to pick who was going to win the game,” he added.

The Englishman, however, said that he understands the importance of the derby encounter and hopes to get better next season.

“The Indian boys know the importance of the derby. I have told the foreign boys about it. It’s a huge derby. Not nice to lose them. One thing to say about football is that you always have a little chance. Should get better for the next derby coming up next season,” the 46-year-old said.

“It’s not nice. I have played derbies myself. I understand the pain. The boys played the hardest. We tried. We gave a crazy goal away. The game is going to come around anyways so there is going to be an opportunity for the club to right the wrong. So next season there is definitely going to be two games against ATK (Mohun Bagan). They are also a strong team. We have seen where they’re. They are well marshalled by (Sandesh) Jhingan) at the back. Hopefully next season we can turn the tables. That’s football,” he added.

Speaking about how East Bengal will shape up for next season, he added,  “We don’t know what’s happening next season. Hopefully this will be answered in the next week or so”.

Fri Feb 19 , 2021
Antonio Habas pointed out that players like David Williams and Javi Hernandez have also turned up in front of goal… ATK Mohun Bagan completed the double over arch-rivals East Bengal with a 3-1 victory in the Indian Super League (ISL) 2020-21 game at the Fatorda Stadium on Friday.  The Kolkata […] 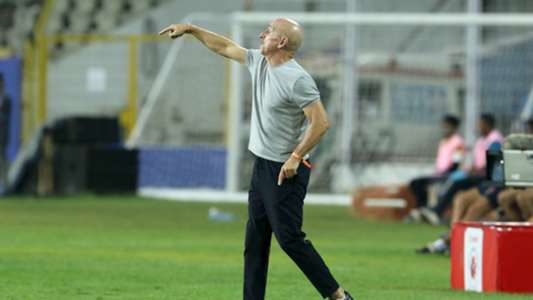