Sebastian Kehl has admitted Borussia Dortmund may reach a point where they are powerless to keep hold of Erling Haaland.

The Norwegian’s stock continues to climb in the Bundesliga, and a scrum of Europe’s major sides are lining up ahead of a possible bidding war.

The pot was stirred this week when Haaland’s agent Mino Raiola was spotted in Barcelona – fuelling talk of a possible move to Catalunya .

Kehl, Dortmund’s head of first-team football, is aware of Raiola’s trip to Spain and said positive talks have taken place with the player’s agent – with their intention being to keep the forward at the club.

“Our position is clear: we are planning with Erling,” Kehl said. “We are very relaxed about that.

“Of course, we have been following the situation. But we had a very, very good talk with Mino and his (Haaland’s) father just recently.”

The concern for Dortmund is Haaland has a reported buy-out clause of €75 million (£64m / $88m) that becomes active in 2022, and any club who bids that figure would take BVB out of the picture.

When asked if Haaland has asked Dortmund to let him leave, Kehl replied: “I don’t want to go into those talks now. From a certain point on, we may no longer be able to influence what the future will bring.”

Being the subject of huge amounts of media coverage could be a source of distraction for any player.

At 20, Haaland is in the fledgling stage of his career – and seeing links to Barcelona, Real Madrid, Manchester City, Manchester United and Chelsea, to name a few of the sides jockeying for position, could turn his head.

Kehl, though, claims Haaland’s demeanour has not changed in the face of intense media speculation.

“I have seen the boy in training in the last two days and I have seen how hungry he is and the sparkle is in his eyes,” Kehl said.

“We are very ambitious, we need Erling to achieve our sporting goals, and we have made that clear.”

A big few weeks for Dortmund

The Bundesliga side are still in the hunt for Champions League glory, and face Manchester City over two legs in the quarter-finals this month.

Given the quality at City boss Pep Guardiola’s disposal, Dortmund head into the tie as outsiders to qualify.

If they are to stand any chance of persuading Haaland to stay, Dortmund must be competing in the Champions League.

Winning the tournament would guarantee that, as would securing a place in the top four in the Bundesliga.

Their chances of a top-four finish suffered a setback on Saturday, as they were beaten 2-1 by Eintracht Frankfurt and are now seven points adrift of the Champions League qualification spots.

Sat Apr 3 , 2021
The Nigerian put up a key performance for Oscar Fernandez’s team but the Ivorian’s effort helped the visitors claim an away win Osinachi Ohale scored and provided an assist for Madrid but Ange N’Guessan’s assist was crucial in Tenerife’s 4-2 away victory in Saturday’s Spanish Primera Iberdrola encounter. Nigeria international […] 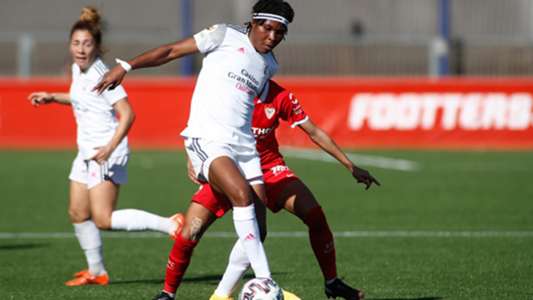