Chidozie Awaziem’s joy at La Liga returning following the coronavirus suspension was short-lived on Saturday, as the Nigeria defender gifted Real Valladolid an early opener in their 2-1 victory over Leganes.

Only two minutes had elapsed when Awaziem, attempting to deal with a high ball through the middle, headed the ball beyond his onrushing goalkeeper Ivan ‘Pichu’ Cuellar, allowing Enes Unal to rush in and poke it home.

Perhaps Awaziem can be forgiven for ring rust due to a lack of recent gametime, after all, he hadn’t played for three months before this fixture due to the absence of live action amidst the Covid-19 pandemic.

However, the goal ultimately proved costly for Leganes on the day—Ruben Alcaraz added a second in the 54th minute before Oscar Rodriguez’s consolation late on—and may prove costly longer term.

While Valladolid’s victory takes them up to 32 points—seven clear from the dropzone—Leganes missed the opportunity to draw level with 17th-placed Celta Vigo.

There’s still plenty of football still to come—with 10 games left—but the hosts could ill afford a slow start to the returning campaign, let alone a home defeat against fellow strugglers.

Conceding cheap goals has also been a specific problem for Leganes this term—their 41 goals conceded is the joint fourth w0rst in the division, while their 33 goals for puts them 11th in the league overall.

It’s clear where their problems lie, and this is an area that—surely—experienced coach Javier Aguirre will have been drilling his troops on ahead of the league’s return.

Awaziem’s moment of madness surely undid much of the work done during the downtime, and represented a disastrous return to action for Leganes.

However, does the Nigeria defender deserve the criticism that he has received—and will continue to receive—from observers in the aftermath of the loss?

Even Opta have opted to label the defender’s header back towards goal as an ‘Error that led to a goal’, which may appear a little harsh.

Certainly, Awaziem’s ability to deal with the high ball forward demands some scrutiny.

His awareness appears to be lacking, as he appears to have no idea of Unal’s proximity when he opts to head the ball back to the keeper.

So early in the game, with the league only just resumed in a crunch relegation battle, it’s no time to be taking risks—if Awaziem must deal with the ball while retreating, rather than attack it square on—then he ought to head the ball out of play or direct a forceful header back to his keeper, creating space in the process.

Instead, he appears to be caught in two minds—perhaps a consequence both of taking his eyes off the ball in order to engage with Cuellar, and his body positioning—and fails to put enough conviction on his header.

Definitely, Awaziem could have done better in this situation.

However, how on earth can the centre-back take the blame here ahead of goalkeeper Cuellar?

Where was the sense in this decision-making from a keeper who, at 36, should have known better?

Instead, Cuellar rushing out towards Awaziem destabilised the defender, created doubt as to what he should do next, and left the goal exposed.

Ultimately, Cuellar’s decision-making transformed the decision from a routine situation for Awaziem to a disastrous return to action for Leganes, and yet he could clearly see that the Nigerian had the situation under control.

Opta and armchair pundits may have attributed the blame to 23-year-old Awaziem, but it was the goalkeeper, not the defender, who transformed an innocuous clearance into an early goal.

Sun Jun 14 , 2020
J.A. Sanz Real Madrid announced this Sunday that fans will have the opportunity to bid for first-team players’ match-worn shirts from the six remaining home fixtures of the league season. The project, in collaboration with MatchWornShirt, will begin on Sunday along with the resumption of LaLiga Santander at the Estadio […] 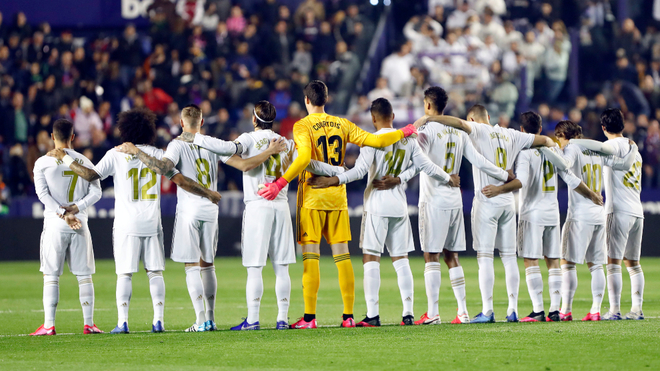